it's been a long, lacy summer

Although I didn't produce many articles, I did spend most of my summer knitting lace in some form or other.

First there was the Myrtle Leaf Shawl from "Victorian Lace Today". I cast on in October and for the sixth and final time on 3rd January. I finished knitting on 17th January and blocked it on the 20th January. It was then I discovered the Big Bad Hole. I won't bore you, dear readers, with the details, you've already been through it once; but for new readers you can read about the beginning attempts here and here, the story of the dental floss here, the final cast on here, and my tribute poem/song to almost being finished here. The shawl was finished in enough time for DD's wedding; however the weather was so hot that even at midnight she was not cold enough to wear it outside! [And just in case you're new here and missed all the excitement: Yes, The Wedding went well, thanks].

After all the fun and games with Myrtle, I met my next Knitting Knemesis in the form of socks. Well, sock yarn to be more precise. This particular yarn has a habit of pooling in strange ways despite the short colour repeats. But finally, I found a solution: Waving Lace Socks from Favorite Socks. 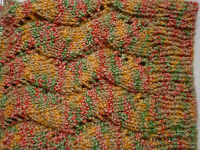 I knitted the first of the socks while away on R&R after The Wedding. When WM and I returned from our week away, I intended to knit the second sock [no SSS here!] but I received an invitation to our niece/god-daughter's baby shower so I had a new project to knit. 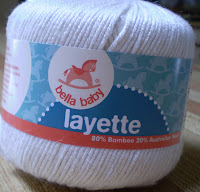 I bought bamboo/wool [80/20] yarn and cast on without doing a swatch. I frogged the first attempt. I was using a pattern called Tumbling Blocks from Knitting Pattern Central's directory of baby blankets. The pattern was designed for thicker yarn on bigger needles. I had to guess [based on the gauge stated in the pattern and on the yarn label] how many stitches I needed. The pattern was for a smaller blanket than I wanted so I had to add 'a little extra' to compensate. My first 'guestimate' [intelligent guess] was 209 stitches. I knitted just 5cm/2inches before I finished the first ball; since I had only ten balls that obviously wasn't going to work. More thinking needed. If I had taken time to do a swatch and block it I would have known exactly what I was dealing with but enthusiasm and a deadline had me pushing ahead!

I did some more calculations based on the smallest size I thought reasonable for a baby blanket and this time cast-on 145 stitches. This seemed to give a blanket about 75cm/30inches wide before blocking so I forged ahead. Bamboo, being a cellulose fibre like cotton, would surely stretch when blocked and give me a slightly bigger size. Once I had knitted enough to gave me the chance to measure it on my needles, it looked like the blanket would be 90cm/36inches before blocking - perfect!

And so it was, dear readers, that I cast off the blanket on Friday night and blocked it before I went to bed; the baby shower was on Saturday afternoon. It blocked to 100cm/40 inches wide and 124cm/50inches long which is a little longer than I would have liked but a good size for a baby's blanket. Plenty to tuck in all around the crib! However, it wasn't dry by Saturday afternoon and I forgot to allow time to sew the ends in [I was in a hurry to block it and decided to leave the ends till after it was blocked] - I went to the Baby Shower with an IOU! :-( 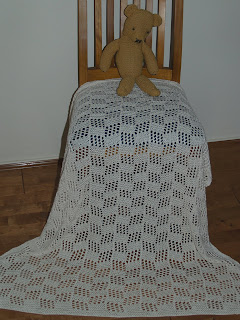 So I present, for you're viewing pleasure, the modified Tumbling Block Baby Blanket. The photos were taken today, two days after the Baby Shower, so perhaps it's just as well I was disorganised! Unfortunately, the gorgeous sheen of the bamboo doesn't show up well in the photographs. The original pattern had a border of blocks and a stocking stitch centre panel but WM thought an allover lace pattern preferable and I have to say I agree with him. Thanks to Ranee Mueller for making the Tilting Blocks pattern available through Knitting Pattern Central [check it out if you haven't been there - literally hundreds of free patterns for adults and children].

And there's still lace on my needles, the second Waving Lace Sock was cast on last night and I'm off to knit it now!
Posted by Lynne at 4:17 pm