can you help me? 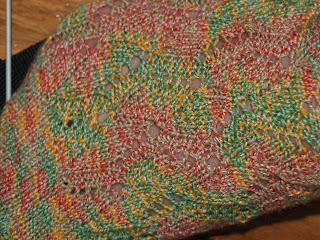 I cast on the second Waving Lace sock on Saturday and last night completed the second repeat. The yarn is pooling [see photo to the right] as it did on the instep of the first sock. The red is forming a spiral around my leg and I don't like the effect. I want the colours to be random as they were on the first sock [below]. 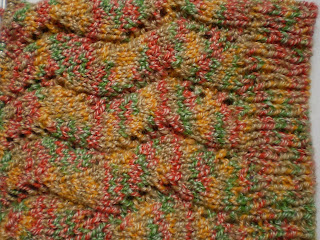 I can't tell if I am knitting with the colour repeats in the same order because I've already sewn the ends in and grafted the toe of the first sock. I wouldn't think it would make that much difference - the repeats are short, six to eight stitches, of each of the four colours. And remember, the two photos here are of the same sock - one before the heel, the other after the heel.

If I rip it out and start again, is there any way to ensure that the pooling doesn't happen again? I obviously don't want to start over and have the same thing happen; I may as well keep going with what I have! I'm using the same needles, the same yarn, the same number of stitches and I assume the same gauge: the first sock has been stretched from being tried on several times - it's cotton so it's not as resilient as wool. What can I do?

The last paragraph has been edited to explain why I can't be sure if the gauge is the same!
Posted by Lynne at 10:50 pm