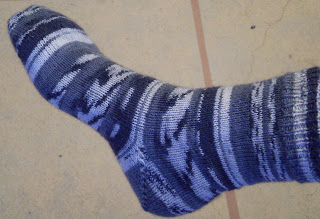 I seemed to spend more of my summer knitting lace than socks; in total I managed three socks!

The first was the second of a pair of self-striping grey socks which will go to charity. Strangely enough, since I have a few balls of the same yarn, the third sock was also a grey self-striping sock and the end of the first ball. 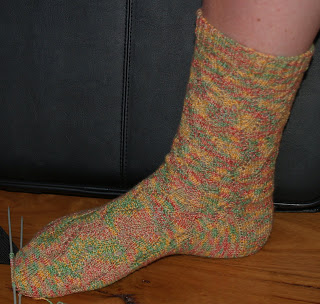 The second sock was Waving Lace from "Favorite Socks". It was both a lace project and a sock project.

So, not much sock knitting from me but I actually produced three more socks than I completed last summer when I was banned from knitting on two separate occasions because of frozen shoulders. It has been fun watching others knit socks and especially to be introduced to the concept of the Personal Sock Club.

Thanks Rose Red and Bells for hosting Southern Summer of Socks again this year. My goal for next summer will be to improve by at least one sock! LOL

And now I'm off to cast on for the second Waving Lace.
Posted by Lynne at 8:30 pm