in which I speak of family 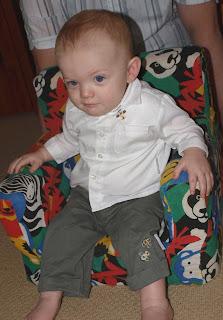 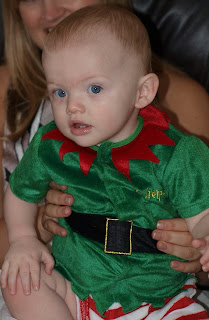 To answer the questions from the comments on my previous post:

Grandbubby is doing fine but is not a baby anymore! He will get his own special post next week but for now, here's a couple of Christmas photos. He had two changes of clothes - his "good" clothes in the morning and his "Santa's elf" clothes after lunch.
Family history is addictive and fun and maddening and frustrating and... one needs lots of time, patience and a certain amount of capital to do a good job! "Who Do You Think You Are?" is one of my favourite shows, no-one is allowed to talk while I'm watching it, but it gives an unrealistic idea of what it's like to trace one's own family.

And now on to family news from the past eight months:

For WM and I, the "Darby and Joan" lifestyle goes on much the same. We celebrated our 33rd anniversary in December as well as the nineteenth anniversary of living in this house. WM still works full-time as a station manager and is finding his job a bit more stressful than he would like. I have just two and a half hours work a week (I'm not complaining).

During the researching and writing of the book, my hard drive died. Fortunately, my computer technician was able to retrieve all my data (most of which was backed up) and installed a new, larger hard drive in my machine. I am thinking aobut buying a new computer now - WM would like this one, it's much bigger than the dinosaur he is using!

We had a wet weekend away in October staying in an apartment at Coalcliff, south of Sydney. We like to get away for the weekend in places that are within a couple of hours from home, otherwise the driving is such a pain we wonder why we went away in the first place! I will save the photos of that weekend for another post (gives you a reason to come back LOL).

WM has his annual holidays in April. We are considering a trip to Perth on the Indian Pacific (Australia's only  trans-continental passenger train) and then a week in the Perth area before returning to Sydney. Any comments / suggestions?

We recently spent a week at mum's place. WM helped mum with jobs that needed doing around the place; I stayed in the comparative cool and worked on the family tree (a future gift for mum - can't say anything too much because she sometimes reads my blog!)

Mum is lonely but coping after dad's death twelve months ago. That's to be expected after fifty-three years of marriage. She will not leave Bingara (a small town on the north-west slopes of NSW) although her closest family, my sister, is 160 kilometres (100 miles) away. Mum intends to remain in her own home until she can no longer care for herself. She is finding many things that she never knew she could do and is proud of her achievements. She is also clearing out the clutter - dad was a hoarder!

Mum has to have a cataract removed from her eye. The date has been set for 11th November! Public hospital waiting lists - who needs them? Mum is also having physiotherapy for her shoulder although no diagnosis has officially been given. It is not frozen shoulder but she can't knit! I remember the trauma of that.

DD and SIL were previously living in a two bedroom home unit (apartment). It took an hour to drive from here to there, and that was in non-peak hour traffic! In October, they bought a house only twenty minutes drive from here. It's old and needs work but it has electricity, hot and cold running water, a stove that works, air-con in the main living room (they have two living rooms), three bedrooms, and only leaks in one room in bad storms. It's two minutes walk to the local primary school. Better yet, it belongs to them (well, to the bank) to do with as they will.

On 31st January, DD and SIL celebrated their second wedding anniversary. We looked after "The Boy" while they went out to dinner. We were going to send them to the same hotel where they spent their wedding night but WM decided a gift of money for landscaping would be more practical!

DD and SIL are expected their second child in late June / early July. As with "Grandbubby #1", they won't find out the baby's sex until he/she is born.

And that sums up eight months in the never2hot2knit family! I close with another photo of "The Boy". 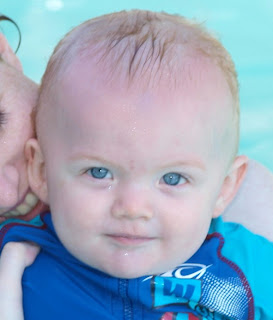