Last Otober, WM and I spent three cool and mostly wet days at Coalcliff, which is south of Sydney. We left home in warm, sunny weather and arrived at our accommodation as the storm front arrived. From then on, the weekend was cool and cloudy, with a fair bit of rain thrown in. We did not have the views shown in the photos from the linked webpage but the accommodation was clean and reasonably comfortable (except for the too hard bed). I found the living room cold. It had a tiled floor, which is logical near a beach, I guess.  The split system aircondtioner was in the bedroom (which was carpeted) not the living room, which didn't seem to make any sense! I sat and knitted with my feet on a cushion to insulate them from the very cold floor!


We did go out quite a bit. We walked from our accommodation to this bridge. We walked the length of it - 665 metres (740 yards) - both ways.
The photo on the right is a photo from the website describing the bridge. Below are the views taken by WM on the bridge on a grey and windy day. 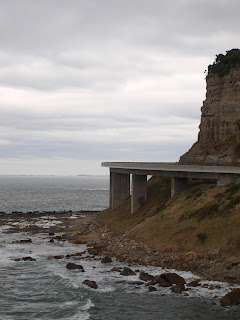 The first one is looking south; the cliff face is the one closest to the viewer in the promotional photo.


The next two photos show the view looking north, towards Coalcliff. 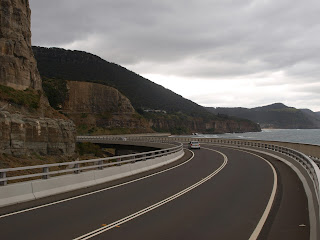 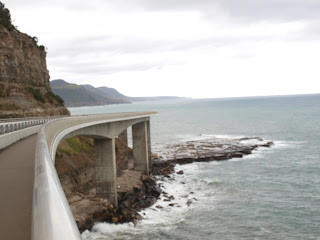 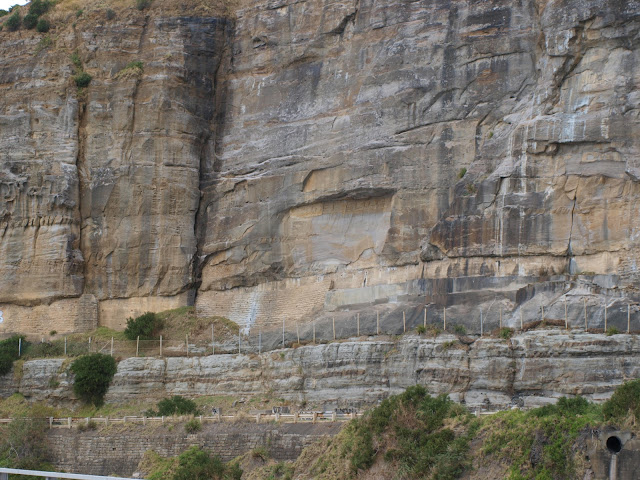 In this photo, you can see the old road.  It's towards the bottom of the photo; it has guard rails along the edge to keep the traffic from driving over the cliff. Above the road, you can see the fence that was built to catch rocks as they fell from the cliff face.

The road was closed indefinitely in 2003 after a land-slide. There was public outrage after the closure so the government built the bridge to replace the road. The bridge was opened in December 2005.

We walked on the beach. Coalcliff has to be one of the dirtiest beaches in Australia; not because of litter, but because the sand itself is dirty: it is very dark with the coal dust it contains. Mind you, it still felt like sand and it didn't smell, it just looked strange when one is used to golden beaches.
This creek could be almost anywhere in Australia (except the desert). 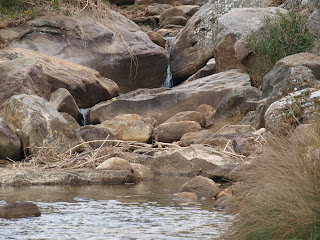 But turn around and this is the view! 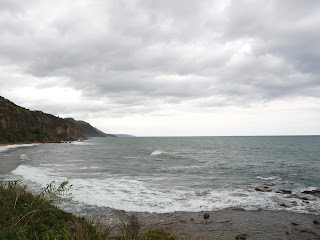 We visited Bald Hill at Stanwell Park, a couple of kilometres north of where we staying. This is the view shown in the tourist guides (and one we have seen on several occasions).

Below is the way we saw it - no it's not a black and white photo! The cluster of buildings to the right of the photo is Coalcliff, where we were staying. 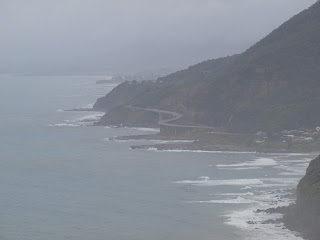 On the Sunday we drove to Thirroul for lunch. We intended to have pizza at an award winning pizzeria. Thirroul is a tourist town a few kilometres south of where we were staying. Tourist town - Sunday - long weekend - not raining - pizzeria not open! Weird, huh?

We walked around Thirroul and eventually did find somewhere to eat lunch. No photos; we went out for lunch and left the camera at home!

WM missed the Grand Final of the Rugby League and his team was playing for the first time since 1999! Why? We had poor reception in our accommodation - blame the high cliffs above us! Fortunately, DD taped it for him so he got to watch it about twenty fours late! No one was allowed to tell him the score even though he knew his team had won!

It's nice to get away but when the bed is so hard one can't sleep, is it really worth it?
Posted by Lynne at 1:19 pm