DD and I decided to make a Modern Sample Quilt by Elizabeth Hartman from Oh Fransson. This site has been enormously helpful to us with step-by-step tutorials all the way.

The Modern Sampler Quilt is made from six sets of six blocks. Each block is made from two contrasting fabrics; thus twelve fabrics were needed for the blocks. We already had seven fabrics left from our previous project* so we added another five.

We decided to make our quilt blocks from a print and a 'solid' fabric. 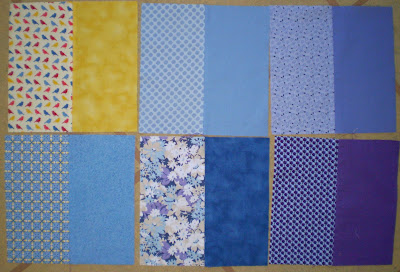 Several weeks ago we cut all the pieces of the thirty six blocks using a rotary cutter. We stored all the pieces in plastic sleeves in a ring binder folder so they wouldn't get lost or mixed up (my idea and I'm very proud of it! LOL) - this is a long term project because we don't get too much time to work together on patchworking! 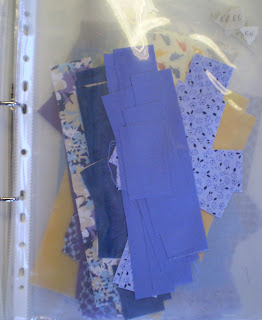 A couple of weeks ago, DD stayed here for a couple of days. Between playing with GS#1 and attending to his needs, we have pieced slightly more than half the blocks. This photo shows the third set of blocks: I know these are called four patch blocks. 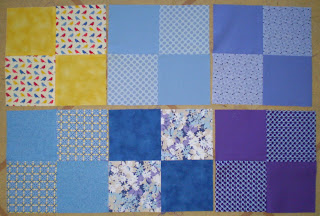 For the 4x4 patch blocks, I learnt the hard way that piecing sixteen 2 1/2 inch squares to make a block requires accurate cutting and accurate seaming! I had to unpick an entire block (and may have to cut some more accurate squares). I should also learn to check the direction of the birds in the print before I take the photo! 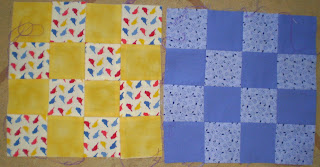 DD, on the other hand, has become quite good at straight accurate seams and almost flawless crossing points (I don't know the correct quilting technology yet). 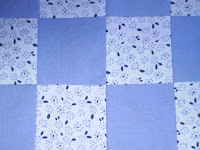 This afternoon, WM and I are leaving to spend the long weekend in a cottage in the mountains for some much needed rest (for him). I will take plenty of knitting - the maximum temperature forecast for the weekend is 10*C (50*F) so I don't plan to be out and about too much! DD, SIL and GS#1 will stay here to look after the cat. Perhaps she will do some piecing on her own!!
Posted by Lynne at 11:20 am