Quilting Adventures in Knitterland
Project 1 - Chapter 2: And sew it continued...

On Sunday, the sewing continued. As did the pressing of each seam after it had been sewn (I learnt that way back in the days BDD (before DD) of doing garment assembly at TAFE - then called "Tech").
Our seams got straighter with experience but the strips remained as they had been cut (how strange!!). One nearly-block of six strips (supposedly 1 1/2 inches wide) measured less than nine inches in width; the next was wider than 9 inches. When I went to school, 6 x 1 1/2 = 9. However, that was in maths - not in home economics (a subject which wasn't offered at my all girls’ school). Obviously where the sewing of fabric pieces is concerned, maths isn’t always absolute! Or could it just be the operators? LOL

What is a nearly-block? I'm glad you asked because I was going to tell you anyway! It’s a rectangle made up (in this case) of six strips of fabric supposedly a minimum of twenty inches long.

This rectangle was to have been cut in half to make two nine inch blocks (when completed) but one of the strips was only eighteen inches long. Those of you who quilt will know that to get two sewn strips nine inches in length each, one actually needs nineteen inches of fabric! So why did we cut this one so short? Ask the people in India who cut the Flat Quarters that are for sale at the Big Box Store. All the Flat Quarters came from the same company; all were labelled 50cm x 52cm (20 inches x 21 inches).

Lesson #1: measure the Flat Quarter before cutting! Just because it is illegal in NSW to misrepresent the size/weight of the product doesn't mean it isn't done!
Lesson #2: don't buy pre-cut flat (or fat) quarters from the Big Box Store. In future, buy fabric off the bolt (even if it does cost more than as Flat Quarters - work that one out!) Perhaps, better still, shop at one of the many reputable patchwork shops in the local area.

Anyway, because all the strips of this particular fabric were eighteen inches in length, we modified our design. What was to have been a quilt top for a single bed made up of nine inch blocks became a floor mat for GS#1 for “tummy time” - made up of roughly eighteen inch blocks! Yep, you read that correctly - eighteen inch blocks. We are nothing if not inventive and open to new directions!

There was some ripping of seams (do quilters also call it “frogging”?). There was a great deal too much of fraying along the length, meaning that strips that might have been close to two inches when cut were more like one and three quarter inches after they’d been sewed, ripped and frayed! (Refer to Lesson #2). Finally there were four blocks approximately eighteen inches wide and with strips varying in length (Lessons #1 and #2) between eighteen and twenty one inches.

WM stepped into the fray (excuse the pun) and squared off the hopelessly out of shape blocks with the newly bought rotary cutter (my excuse is that I’m left handed). He'll deny it but the truth is that he couldn’t wait to play with a nice, new, sharp tool! 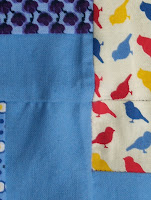 At last it was time for the joining. I sewed two blocks together top to side. DD sewed two blocks together in the same fashion. Then came the moment of truth: all four blocks were joined. Look at that junction! I am so proud of that. All the seams lined up perfectly!! DD may call us the Hacky Packy Quilters but that seam was a great moment in my sewing life!
So here it is: our first quilt top! All we need now is the border, the backing, the batting and (scariest of all) the binding before we even attempt some form of quilting. We may even get it finished before GS#1 can crawl!
BTW, it was just coincidence that the white strip printed with birds was on the end of the two adjoining blocks; same goes for the blue strips on the other two blocks! But we'll say we designed it that way if anyone asks!! LOL 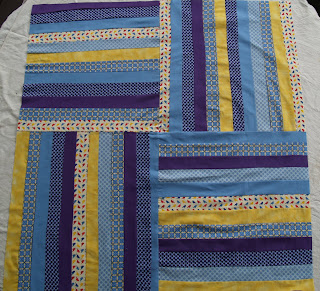 We probably shouldn't air our bodgy piecing in public but, hey, what the heck! It may encourage others to know that everyone starts somewhere and not every attempt is perfect! LOL
Thank you to all who have left encouraging comments. I’m not sure about the addictive part – as far as sewing goes I think I’m more product than process.
Posted by Lynne at 7:48 pm