I've stalled [again] on my Supersocke cotton socks. Please let me tell you the saga...

I cast on last year at the beginning of Southern Summer of Socks. They were my first toe up socks. I very quickly finished the first one and cast on for the second. But I had a niggling doubt about the finished sock so I took it to a Guild meeting to talk to The Guru. She said the sock was way too big for my foot and showed me by how much - at least six centimetres!! So I ripped out that first sock to the point indicated. I also had to rip back the second sock because I'd already passed that point!

A few days later I was told to stop knitting due to my frozen left shoulder so the socks waited patiently for me to recover. When I was allowed to knit again, I couldn't use small needles - it was just too painful. Then my right shoulder froze and it was back to 'no-knitting'! :-(

All year small needles have been a problem - it took me eight months to finish one baby cardigan! Eventually, I was able to use small needles for more than half an hour and I finished the Moda Vera Grey socks. I revisited the Supersockes, turned the heel and decided on a pattern for the legs. The first time I had knitted plain ol' stocking stitch but the pattern in this yarn is fairly subtle [though the colours are not] so I decided I wanted something a bit more decorative. Nothing too fancy - maybe just a small cable. I didn't want to use cable needles because the stitches are so small - if I drop one I can never pick it up without it unravelling to the round below [and sometimes further than that]. Overnight it came to me - a mock cable. I found this pattern - and on I went. 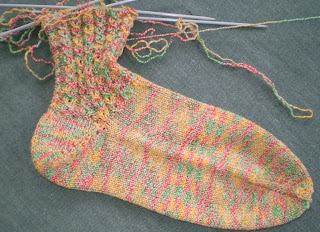 About half way up the leg I decided to try the sock on. The mock cable is a form of ribbing and the leg was looking pretty narrow so I was a bit concerned. I thought the idea of toe up socks was so you could try them on as you go but getting the sock on with those four dpns still attached was a bit tricky! Finally I pulled the sock over my heel and voila the leg stretched enough [maybe more than enough] to fit my calf. But...

The sock is a little too snug in the length of the foot and I'm not sure if they'll block to the correct size so I've stopped knitting to think about it!

That'll teach me to do a test swatch of the yarn before I start, won't it?
Posted by Lynne at 8:52 am