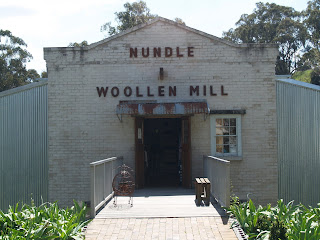 You can read the history of the Mill here - it's not as old as people imagine though the mill equipment is quite old.

We arrived at the Woollen Mill just as the doors were opened [10am] and only one machine [the dyer] was running. Just as well I saw most of it in action in April. A lot of the products in the store seem to be imported though they do sell their own yarn too. It's quite expensive as yarns go, it would be cheaper to buy from Bendigo and you would have a greater choice of colours, yarn types and weights too. However, it's the only place I've seen that mills its own 20ply [very chunky]. To be fair, there was a favourable review of Nundle yarn in the current issue of Yarn magazine [Issue 11].

What I do like about Nundle is the mill is set up so you can see the machines in action; something you can't do in Wangaratta or Bendigo - both bigger operations of course. I guess because this is set up as a tourist attraction as well as a working mill.

So, you've had my opinion, here - for your viewing pleasure - some photos from the Mill. First: the dye pot! [Yes the yarn was being dyed that olive colour!] 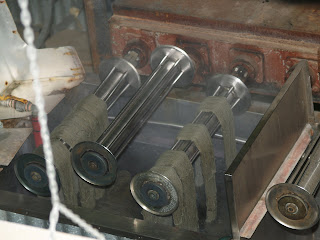 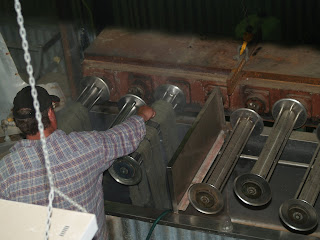 The carding machine [not in action] 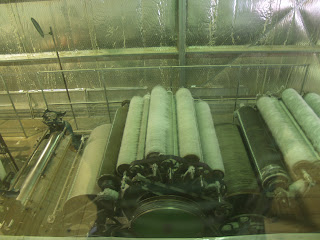 The spinning machine [also not in action] 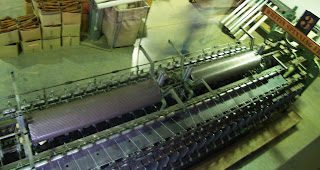 The wool winding machines [you guessed - not in action]. Those two people on the far side in the red and aqua are DD and myself so that gives you some idea of the scale of the place and the machinery. 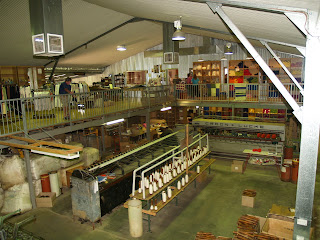