pretty (scrappy) in pink –- a work in progress

Deb, who blogs at A Simple Life Quilts, and I were email-chatting the other day about quilts in progress. I mentioned that I had a pink and purple row-by-row quilt in progress and should pull it out, given that the colour for the Rainbow Scrap Challenge for this month is pink.

This is the story:

Last year, I wanted to learn curved piecing in my quilting class; at the time pink was the colour of the month. I chose to make scrappy pink blocks (hey, why not try something a little more complicated when you're learning a new technique? LOL) So I made these blocks based on an idea in Scrap Republic by Emily Cier. Each of those Drunkard's Path blocks is 4.5”. 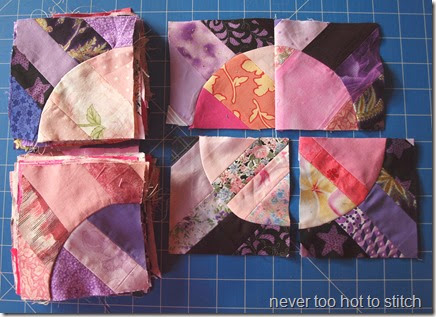 I laid them out in a traditional style Drunkard’s Path meander but I didn’t like it so I turned them into circles (as the photo above suggested). 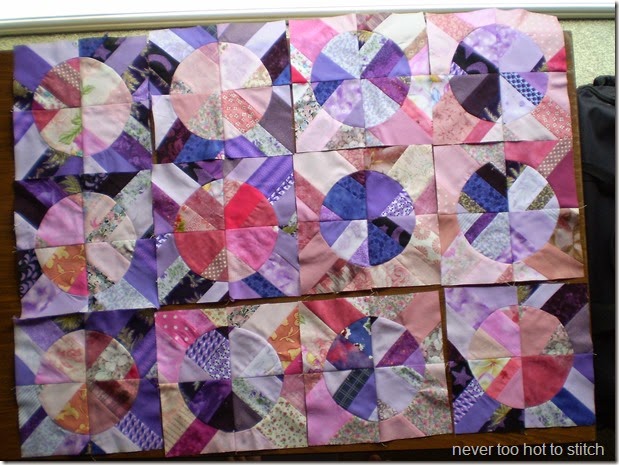 I realised I didn't like making four-inch curved blocks enough to make a whole quilt so what was I to do? Make a row-by-row quilt, of course.

Here are the four blocks I’ve made so far: 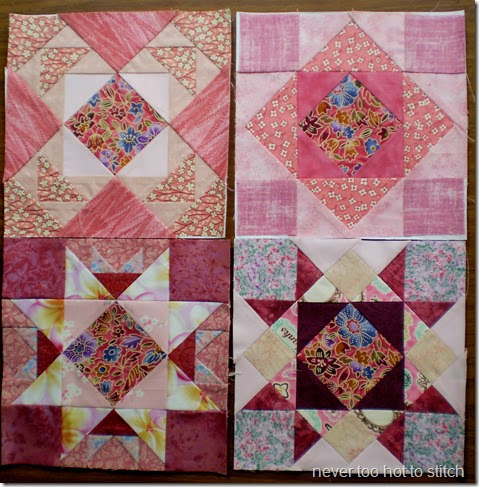 I still have two more to make; they will have the same fabric in the centre. Then I’m not sure whether or how I will sash them.

At home during February, I thought I would use some more of my pink scraps in a new-to-me piecing style: tumbler blocks – here are the first five joined

and here they are on my design wall (at the old house) in the layout I had chosen: 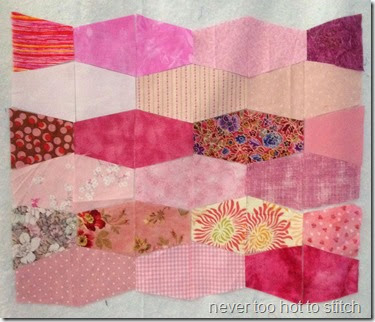 Since then I’ve realised I need to go wider with only five rows of blocks (hence the five joined together above).

Kate, who blogs at Kate’s Quilting (and other arty stuff), and I shared a couple of emails about scrappy quilts generating more scraps and that was certainly true of my Drunkard’s Path blocks – there were a lot of scraps left over. So what would I do with them? Turn them into improv crumb piecing, of course! 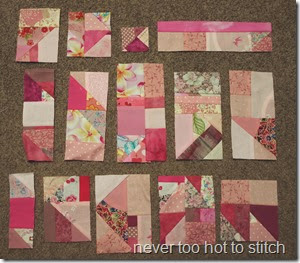 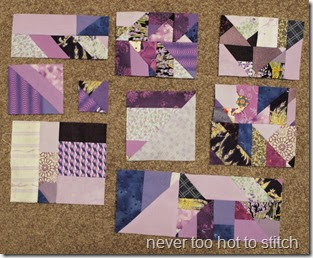 They’ll go on the back of the pink and purple row-by-row quilt; I can’t help sneaking a bit of ‘modern’ piecing into the backs of my quilts (look here for an example). Because most of them go to older people in palliative care units, we tend to be fairly traditional in our quilt making – but I always put a signature panel in the back of mine which tends to be a bit modern looking! This probably won’t be so much a panel as scattered; like this one (Icy Improv Pods by Elizabeth Hartmann of Oh! Fransson) or this one (though not as detailed as this which is Faraway Fields by fellow-Australian, Jules, of Procrasticraft).

So, this row-by-row is the project I’m adding to during this month of pink; and also in the month we have purple in the Rainbow Scrap Challenge.

I’ll be linking this post to Scraptastic Tuesday at Mrs Sew and Sow, WiP Wednesday over at Freshly Pieced blog, Needle and Thread Thursday at My Quilt Infatuation and the Rainbow Scrap Challenge (RSC) at So Scrappy blog as they go live this week.
Are you joining any of these linky parties this week?