it’s February and some people’s thoughts turn to hearts

This is not the story of a finished quilt, so I hope Val will forgive me – but the Tuesday Archives link-up at Val’s Quilting  Studio looks like so much fun, I couldn’t help wanting to be a part of it.

I have to say, this soon-to-quilt-top is one of my favourite projects ever and I’ve blogged about it several times but it’s never had it’s own post.

In 2011, DD and I , with two month old Younger Grandson, made the hour and a half trek across Sydney for the inaugural meeting of what was to become the Sydney Modern Quilt Guild (now the Sydney Modern Quilt Group). We needed a hand-stitching project to keep us busy (well, DD had her hands full anyway) during the three hour meet-up. I had recently acquired an Accuquilt Go! Baby and had been keen to try it out. 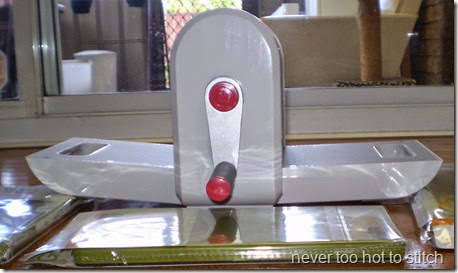 I’m glad I learnt how to do fused appliqué in the few quilting classes I had taken at that point. I had also done embroidery in my past which, of course, included blanket stitch. Putting the two skills together, I was able to work on some of these:

Over the years, DD and I carried appliquéd hearts to meetings of the Caring Hearts Community Quilters and eventually I had thirty blocks done. But they were only 6” (yes, I was a new quilter and forgot to add seam allowance when cutting the squares) so I needed more blocks – or I needed to enlarge them somehow.

Inspiration came from two sources: a chance overhearing of a comment from someone in our quilting group  on the merits of appliqué and/or scrap quilts; the other from the Dresden wedding quilt made by Jess at A Quilty Habit.

I enlarged my blocks and  made them scrappy! 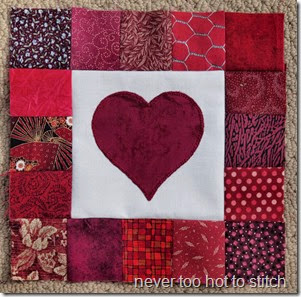 And I worked on the layout until I came up with this: 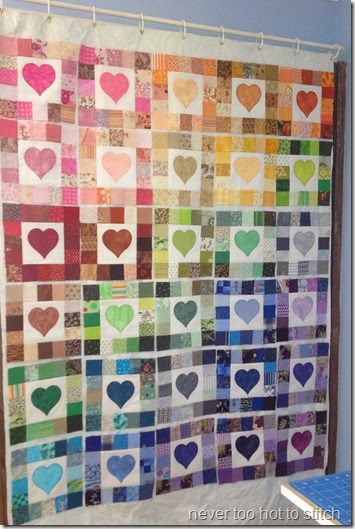 So, the obvious question is: if I love these blocks and this layout so much; why has the project stalled?  Well, firstly, we moved house! That slowed all projects down for several months! But, more importantly, I know I need to add white sashing between the blocks but I'm not sure how I want to quilt it (using a walking foot; FMQ is out of the question for now). I think I want to echo quilt around the hearts but dragging the whole quilt though my domestic machine (even though I have a 9” harp space) doesn't inspire me so I’m considering QAYG row-by-row (gasp!)

What would you do if you were a novice quilter with little FMQ ability?
Posted by Lynne at 3:16 pm