It hasn’t been a very productive month, sewing-wise, for me. In the middle of the month, my uncle, who has been researching my paternal family for many years, sent me some information from a distant relative that neither of us has met. At first I only glanced at it, then I decided to read it, then I compared it to the information I had in my family tree. I was hooked! I spent all my days working on my family history – refining and adding. I’m an “all or nothing” kind of gal; when I get involved in something I don’t do it by halves; and so (almost) the rest of month passed without a stitch of sewing!

I did, however, do some knitting! Don’t fall down in shock! Last Saturday, I had to attend a meeting of the local branch of the Knitters’ Guild (I was tutoring on ‘planned pooling’) so knitting was needed! I cast on a sock during the meeting and finished on Friday afternoon. I don’t normally knit during daylight hours but I had dropped a couple of stitches and couldn’t see by the poor light in our living room to pick them up so I had to do it while the sun was shining! And, as luck would have it, the sock is knitted in Moda Vera Noir (a sock yarn) in the colour way “pink mix”! 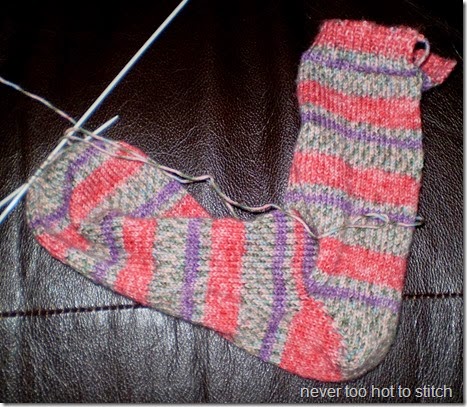 I say “luck” because pink was the colour for this month’s the Rainbow Scrap Challenge. At four o’clock yesterday afternoon, I settled into my sewing room. I had told myself that I would spend an hour cutting and sorting but that just depressed me – after two weeks away from my sewing room (I didn't even attend class last Monday because I had a raging headache) I just wanted to sew. Knowing that it was the last day of ‘pink’, I decided to use my pink crumbs and have some fun. I started out with the intention of making 4.5”  squares and just started sewing crumbs of roughly the same length (on one edge) together. Then I sewed those pairs to other pairs and, in the end, decided I would just sew them together “free-form style” (a knitting term; I guess it’s just a form of crazy patchwork!). I deliberately cut things on strange angles – nothing mattered to me except stitching straight lines (so everything would lay flat at the end) and making sure I had a minimum of a quarter inch seam allowance (some seams are a bit wider wider)!

I finished with a rectangular piece of fabric (15” x 9.5”) that is made up of about 70 pieces of fabric! It will go on the back of a quilt – at least that’s the plan till I suss out the situation in my quilting group: will a truly modern quilt be acceptable? The next piece of ‘crazy’ patchwork will have even more odd angles – the ones I’ve cut here barely show in the finished piece! The bottom right side is looking really good! That’s what I was aiming for! 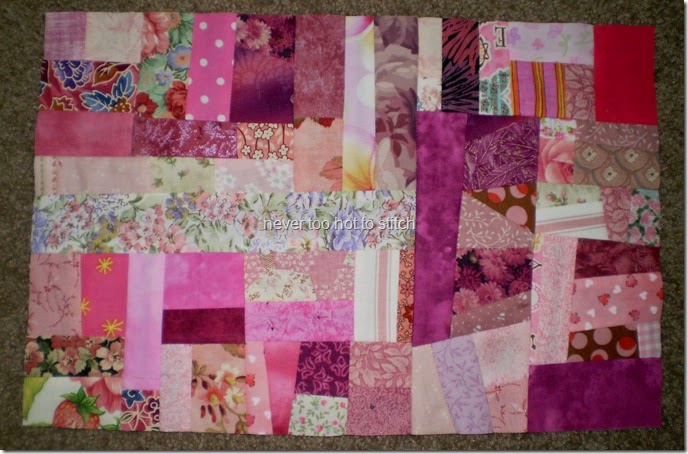 So it’s goodbye to pink sewing for now (I will knit the other sock – I don’t like Second Sock Syndrome! Besides, sometimes my tension/gauge changes if I leave too much time between the first and second sock).

Autumn began here today so I’d go for for red, brown, orange or yellow as the colour for March! But Angela, who hosts the challenge, lives in Florida and there’s no chance she’s thinking of Fall now! I’ve just checked…

Are you participating in the Rainbow Scrap Challenge? Even if you’re not, why not pop over to Angela’s blog and see what other’s are up to with their pink scraps.