slow stitching on the first finish of February

I’m linking this post with Slow Sunday Stitching over on Kathy’s Quilts blog when it goes live later today (it's 7pm Sunday here in Sydney, Australia).

This afternoon, I hand-stitched the two sides of the label that weren’t held down by the binding – a ten minute stitching project that saw my Green Scrappy Strippy quilt completed and become my first finish for February!

This project, started in July last year, was obviously inspired by the Jelly Roll Race quilts. However, this quilt is more thought out – all the fabrics used were graded from light to darkest and the lightest strip is one third from the top of the quilt. 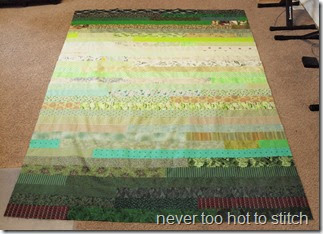 Some of the fabrics, such as the ‘red’ strip at the bottom, don’t even read as green and yet, to my eye, they said ‘green’! Perhaps next time I’d better take a photograph of the fabrics to see what the camera sees!

There are thirty-two rows of 2” strips in this quilt – and I’ve barely made a dent in my green scraps! I wonder what month will be green over on the Rainbow Scrap Challenge which is hosted by Angela at SoScrappy blog.

I quilted this about every four and a half inches apart, with two horizontal rows of quilting, about half an inch apart. I say ‘about’ because, to me, quilting is an art as well as a science and imperfections show that it is made by hand not produced by machine! You can see the quilting better from the back, which also shows my quilting ‘signature’: a pieced panel to widen the fabric to the needed width; in this case the gingham fabric was only 36” so I added a 20” panel giving 56” before trimming. (Yes, those light strips truly are green!) 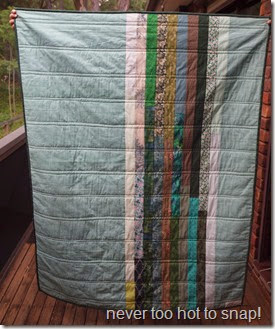 Although the three layers of the quilt sandwich are well-and-truly joined, I wonder whether I should have added vertical quilting to stop the batting from doing whatever wadding does when there isn’t enough quilting. Please feel free to offer a constructive opinion!

I made eight nearly-WOF lengths into binding and should have realised I had a problem when the base of my Teflon-plated iron gripped the fabric instead of sliding over it. But no – sometimes I miss the obvious! I tried to sew the binding onto the quilt – got about a quarter of the way around (about nineteen inches) when the whole quilt slipped and instead of stitching 1/4 - 3/8 inch from the edge, I was suddenly stitching at about 1/16” for about four inches (slow down driver!)! Of course, that meant some unpicking. In the end, I decided to remove the binding completely – I just didn’t feel right about it.

The following day, not being able to find enough of another fabric to make binding, I decided to go with it. My iron stuck to it again and it smelt awful. Obviously it was a polyester blend and something that felt like plastic doesn’t belong on the bound edge of a lovely soft cotton quilt! In the end, I used three different, similarly-coloured, green fabrics that read as the same tone – look closely, you may be able to see them! (probably not!! LOL) 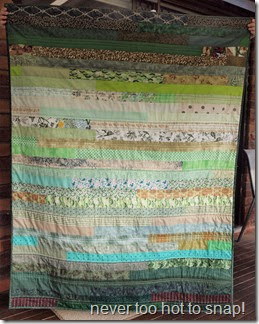 Here’s a close up of one of the fabrics, I’m getting better with my mitred corners! It’s actually much darker than this photo shows – I like dark bindings – but the mitre wouldn’t show when I darkened the photo! 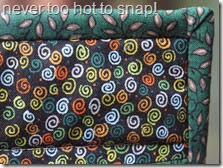 So that’s it! My first finish for February and my second personal finish for 2015 (sixth if you count the four projects I completed in January that were other people’s starts!)

I'm also linking this post with Thank Goodness It's Finished Friday (I'm a little late) which is being co-hosted at Quokka Quilts and A Quarter Inch from the Edge (I've linked at the latter).

So, what do you think? Should I go back and add some vertical quilting? (I’m not taking the binding off!)
What would you do?
Posted by Lynne at 7:20 pm