Before I continue, thank you to all the people who left comments in my Sunday post about binding quilt – it seems we all use more or less the same method!

My year will not continue in this vein. Right now, many Australians are on their summer break. Schools are having their summer holidays/vacation. Nearly everything I am involved with is in recess until later in January. That means I have plenty of time to play in my sewing room if I feel so inclined.

Since my post last Wednesday about works in progress, these are the projects that have had some attention:

I only had to finish sewing down the binding on this quilt. However, I had a lot of trouble with the fourth corner, even more than usual, so I had to unpick the binding and carefully sew it back on again. The fourth corner is now the best corner of the lot! I referred to my issues with mitred corners in my post on Sunday; this is a skill I really want to master this year, sooner rather than later. Here’s a photo of the finished quilt (not my work remember; I only added the binding -- I wouldn’t mind laying claim to it though! It’s a great pattern beautifully constructed; if a little too large for me to hold up for the photograph!). 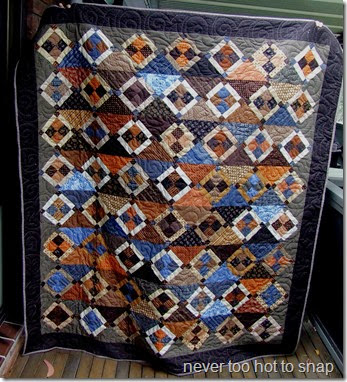 The only task left on this quilt was to hand-stitch the binding down. I completed this by the bright, fluoresent light of my sewing room around one o’clock one morning! This is another beautiful quilt (not made by me) but, again, too big for me to hold the width while being photographed! 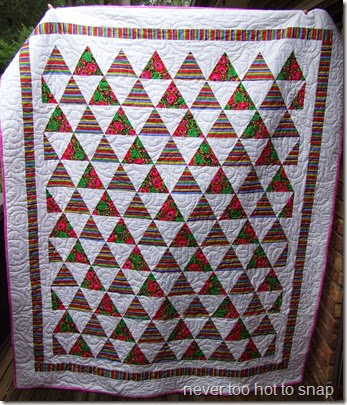 This was the project I showed in my post on Sunday. I was quite surprise and pleased to find that I could quilt almost the whole block in one continuous line – joy! It may not look like it but, with the exception of the two grey lines which were quilted in a different colour, this was how it was done. Quilting gloves and the extension table for my sewing machine made the job easier too! 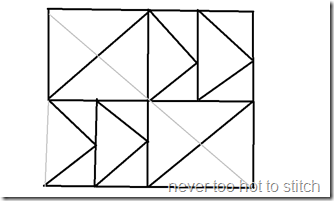 Despite my joy at completing this project, I’ve decided that quilting in the ditch and dragging a twin-size bed topper through my wide-necked machine are not my favourite parts of the process!

Between bouts of quilting, to alleviate the stiffness in my shoulders and neck, I tried to work on the QAYG blocks. I found and cut some batting and backing. I learnt, very quickly, that pre-cutting QAYG backs the finished size is a recipe for disaster! Of course, this makes sense given that we always make our backing larger than our quilt top before quilting and trim away the excess afterwards! So, after carefully cutting several backings to 9.5”, it took only two strips to realise that wasn’t going to work. Fortunately, I have a lot of fabric so making new backings, 10.5” this time, wasn’t a problem. I will save the 9.5” squares (they’re all the same fabric) for another project.

I made a mess of the first block made on the 10.5” backing by not using strips that were long enough! We live and learn and now I know two ways not to do it! Plus I have one orphan block for another project! I watched several videos about QAYG (hurrah for YouTube) and thought I could see my way forward with this project.

Today, I am feeling unexpectedly lethargic (despite a full night’s sleep) so have been pottering on this project. Unfortunately, it means I’ve learnt yet another way not to make it work! The pre-existing blocks are made in a particular way, with a 9.5” front and back and a piece of 9” wadding centred between! I started with a 10.5” back and made all my strips the same (diagonal) length as the ever-shrinking back (it’s being quilted remember) but the wadding moved and ended up less than a quarter of an inch from the edge of the front and back in some places and nearly an inch away from the edge in others! I thought securing it with pins while I sewed on the strips was enough but apparently not enough to stop it from shifting! Thank goodness for seam rippers! Any hints you can give would be greatly appreciated since it’s another three weeks before I see my teacher again!

To complete each churn dash block, I need four ‘side’ units and four ‘corner’ units. I am making the corner units with HST (as expected) but I’m making the ‘side’ units from one strip and two squares – it’s a little bit different and helps remind me that these are scrappy blocks after all! I was very excited to see the first Churn Dash block come together – this is my first ever churn dash block and I’m very pleased! 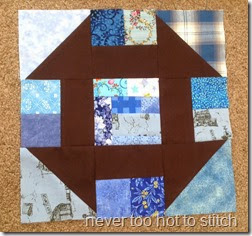 So far, I have made two complete blocks and have eight extra ‘corner’ units completed.

Other than that, I have also cleaned my machine – I try to remember to do it regularly, especially after working with batting: that always seems to make additional lint!

I’m not sure that there will be a “works in progress” post next week – I will be away for three and a half days: tomorrow, WM and I are joining several other couples from church for a long weekend away at Sanctuary Point on the south coast.

I’m linking this post with WIP Wednesday over at Freshly Pieced blog (hosted by Lee) when it goes live later today.

What about you?
What have you been working on this week?