I admit that none of these projects began with me. However, I did finish them.

Firstly there were two quilts for which I had to make binding, attach and hand stitch. For our quilting group, they were big quilts; both of them were 280” around. 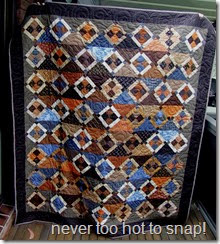 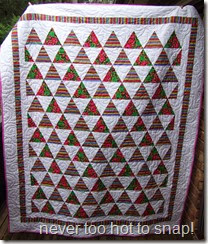 Then there was the quilt donated by my quilting teacher. When donated, it was at the basted stage so the quilting and binding are my work ( although K. made the binding which was a time saver). A couple of years ago, someone donated a pile of 9.5” QAYG string blocks. I made a quilt from some of them that was shown at the Airing of the Quilts in 2014. 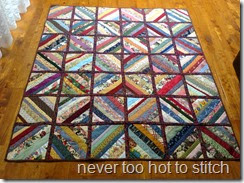 While sorting through UFOs at the beginning of January, I found another 28 blocks. That wasn’t enough for another quilt so I made another 14 blocks – and in the process discovered that I don’t really like making QAYG string blocks!

Nevertheless all fourteen were made and the quilt was put together. I thought the blocks looked dull and decided I would probably not make another of these quilts in the future.

I chose a royal blue printed fabric for the sashing. It did a great job of making every individual block like a little window or piece of art in its own right and made the quilt look more cohesive. Better still, the quilt went from being dull and lifeless to being quite a ‘happy’ quilt.

Unfortunately, I didn’t have enough of the blue fabric (which was left over backing fabric from the quilt in the first photograph above) to make the binding. WM laughed when I told him yesterday that I had to audition fabrics for the binding. I wanted a darker blue but didn’t have enough of any blue fabric that worked so I changed to red. I found a reddish-brown that had tiny blue dots on it that I thought worked. Of course, the dots are so small that the fabric reads as solid maroon from even a short distance. This is a very inaccurate photo of the colour which is much darker in reality but at least the photo shows the blue dots!

I finished hand-sewing the binding at 12:30 this morning – I didn’t intend to stay up to finish it but you know how it is – once I was approaching that fourth corner I couldn’t put it down. I like the way the blocks seem to fold in and out! 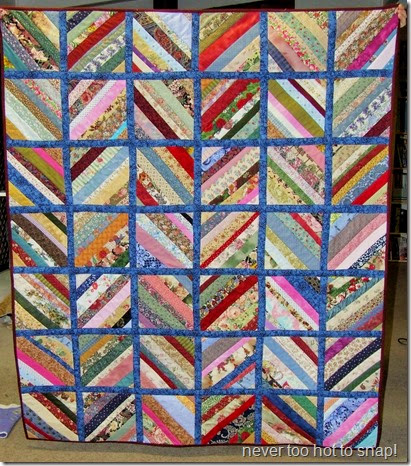 Speaking of corners – this is the first time in nearly five years of quilting that I have four perfectly mitred corners on the back and front of a quilt! Woo-hoo! 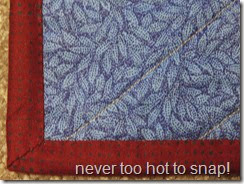 That’s my fourth finish for this month – I’m so pleased. Maybe I have time to get my Bargello table runner quilted and bound before the end of the month? I have to make a back and quilt it before I can bind it!

ETA: I did get my fifth project finished before the end of the month! You can see it in this post.

How is your January progressing?

I’ll be linking this post with WiP Wednesday at Freshly Pieced, Binding Blitz at juliekquilts and Thank Goodness It’s Finished Friday as they go live this week.