WM is not well so what could be a better way of spending a wet Sunday afternoon than curled up in front of the television watching the final two-part episode of “A Touch of Frost” (a British detective series) while sewing down the binding on a quilt?

The quilt was donated to our quilting group by my quilting teacher in 2013 in response to the terrible bush-fires that occurred in September of that year in which 200 homes were lost and a further 200 were damaged. This donated quilt was only at the basting stage and no amount of effort by me at the time it was given would have gotten it done in time. I asked my teacher if she’d like it back but she said that once given, it was given (or something to that effect).

In my last post, I explained that my week had been spent working on other people’s projects.  Quilting this fairly small quilt (48” x 62”) took me three days – I haven’t quilted anything for more than a year and I found my muscles tensed up a lot; each quilting session was shorter than the previous one! Anyway, I finished the quilting late on Saturday night; thank goodness for excellent lighting in the sewing room. I was so exhilarated by finishing that I even attached the binding which went on extremely easily and quickly compared to the previous two quilts! I found a video on YouTube which instructs the quilter to stop a quarter of an inch from the corner, which I have always known, then turn the quilt clockwise 90 degrees and sew off the edge of the quilt. Those extra three stitches have made turning corners so much easier than my previous method, which was to backstitch when I got the quarter of an inch mark! 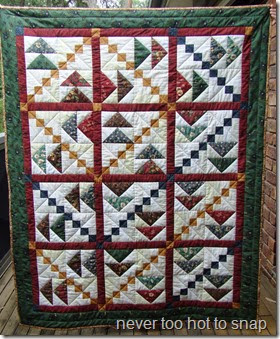 What was even more exciting for me was that the corners mitred on the back so easily! I am absolutely stoked with the results I got this time. The only thing I don’t like is that the binding is not as “padded” as I prefer because I trimmed the backing and batting to the same size as the top (as instructed on this video) – my previous teacher had me trim a quarter of an inch out from the quilt top which gave that little bit of extra padding to the bound edge.

For my next binding, I will try this new method of doing the corners (which logically shouldn’t make the slightest bit of difference!) with the extra quarter of an inch batting under the binding! I might find I need to cut my binding at 2.75”, or even 3”, to compensate for that extra padding but I won’t know until I try.

Did I mention that I’m just so happy that the binding looks almost as good on the back as it does on the front? ;-)

How do you do your bindings?
By hand or by machine?
With a 2.5” binding strip?
What about the corners?

I’m linking this post with Slow Sunday Stitching over at Kathy’s quilts.