Something Old, Something New – November edition

October was a mixed bag (both good and not-so-good) for me, with not much sewing got done.

First I was away at the beach with my mum, sister and her family, as well as DD and the Grandboys, for a few days. When I came home, it was a long weekend so WM spent some time together and I also found a little time for sewing.

On the Monday of the long weekend, I got hit with some kind of gastric attack which lasted five days. I didn’t feel like doing much except reading or watching YouTube videos. One can still be inspired and taught, even when one is feeling poorly, right?

We were supposed to go away for ten days on 21 October but our friends were unable to host us on the planned weekend – she had been offered a last minute chance to go to India on a missions trip – an opportunity not to be missed. WM was on annual leave and we had nothing planned for the weekend coming up, so we caught the train to the nearest station to their place (a seven hour trip), stayed for two days (three nights), then caught the train home again.

We were at home for one day (two nights), before we took off again: this time to visit my mother for a few days then to Woolgoolga, the town where DD and the family live. We returned on Friday with three hours of October left! I will write a separate post about our time away; this is not the time nor the place! ;-)

My sewing time amounted to a few snatched hours on the long weekend, plus two three hour classes. It’s my experience that one achieves a lot less in class than at home with the whole sewing room to oneself! Because we were away most of the month, my sewing machine also had a ‘vacation’, she has gone away for her annual service. I hope she’s back when I go to LQS for my Monday morning class.

So, all that to say: neither of goals for October were met, nor were they even touched.

For some reason, I thought my “Something New” project was learning how to join my braids with every other braid inverted.

See how the braids line up on withwer side of the sashing? That was much more complicated than I thought and I managed to join just two lengths of sashing in a three hour class!

My goals for November, therefore, remain the same as those for October:

Something Old is to unpick the stitches that were previously quilted into my Country Houses quilt and, perhaps, even get started on the applique to replace it! 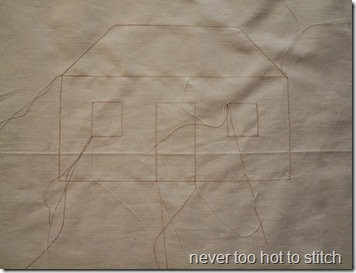 Something New is to make at least one snap bag following this video (the same video I embedded on my previous Something Old, Something New post. I include it here for those who missed it last time).

So, what about you?
How did you do in October with your Something Old, Something New projects?
What are your plans for November?

Link up here with the URL of your specific blog post so we can visit and see what you're up to!