Several weeks ago, in this post, I mentioned that the second round of the Relaxing Robin had opened on Dawn's blog, sewyouquilt2.

The first step was to choose a block from your UFO pile to work with. I actually chose two pinwheel blocks, and decided to build my quilt around those; one in the top portion of the quilt, measuring 24" x 48"; the second in the bottom portion of the quilt, measuring 36" x 48". Unfortunately, I don't have photos of both blocks to show you; the other block is the same but with pinwheel 'spinning' in the opposite direction. 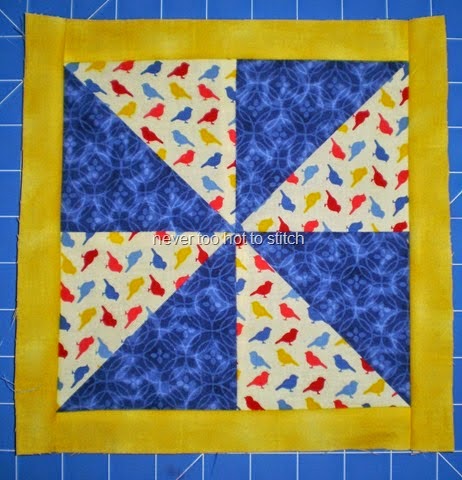 The second step was to  add a small border and to try and use a colour not used in your block. There was no green in my original block so that was an obvious choice. My cordless iron never got hot enough, so this block needed a good pressing but I've never retaken the photo. 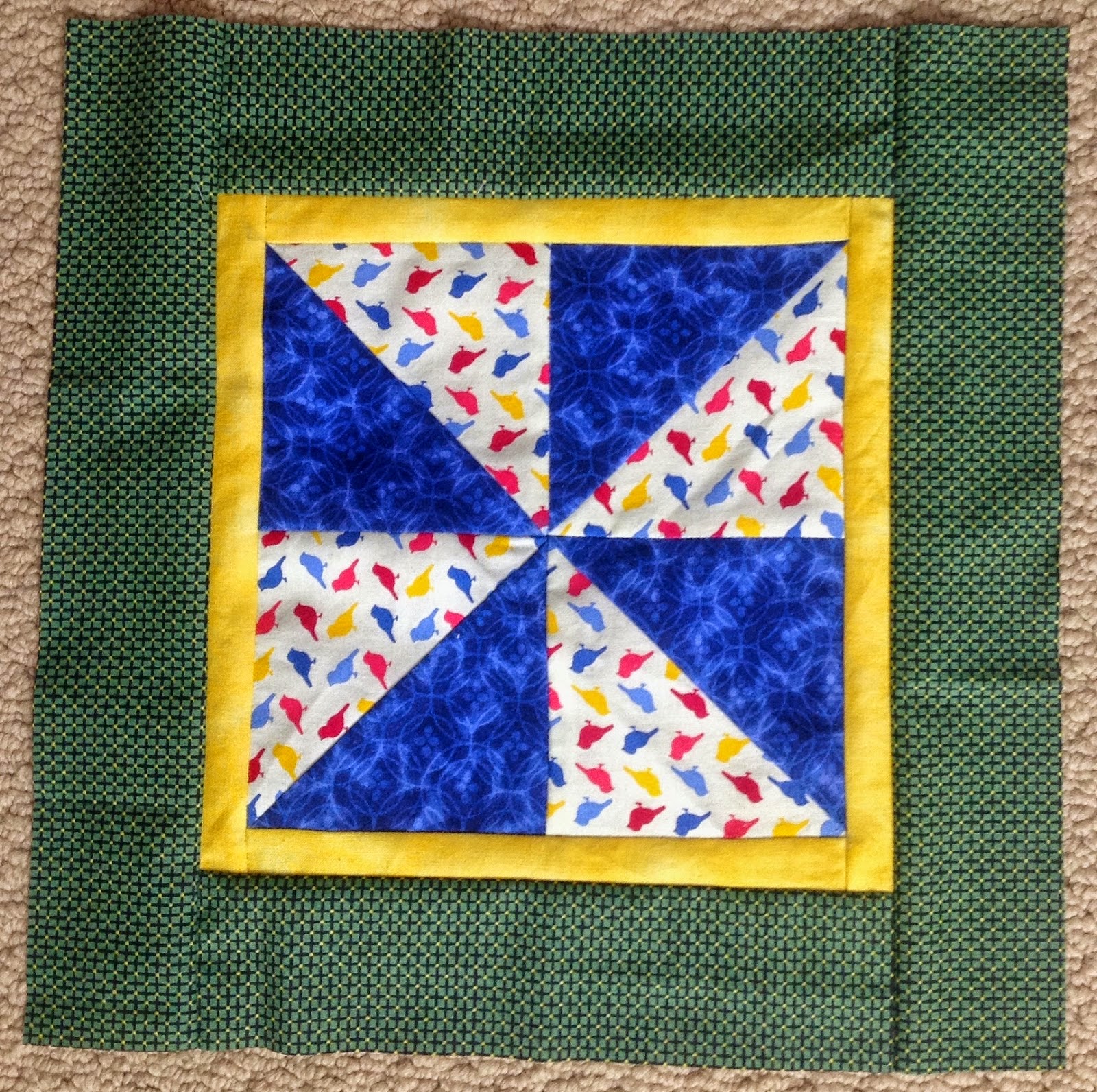 The third step was to add applique. I have not done this yet; I know what I want to do but have not decided on the placement so this will come later.

The fourth step was to add some triangles. I've taken this step and was still playing with it before the rest of my life interrupted my sewing program! ;-)

Firstly, I found another block called "pinwheel" and made three of those.

Next time I make this block, I will change the placement of the colours.

I also made use of ten small blocks I had made in a HST workshop by joining them together with a thin navy strip between each block. It's amazing how colours look very different when one stands away from them, or when one photographs them -- I hadn't realised how dark these strips were. Hopefully, once the quilt is put together, the dark will be a lot less obvious. This strip of blocks will go between the top and bottom portions of the quilt; bring the total dimensions to 64" x48".

I had two of the 4" blocks left (deliberately set aside) because they were also pinwheels. I have framed one of them in yet more triangles but have not yet decided what to do with the second one. 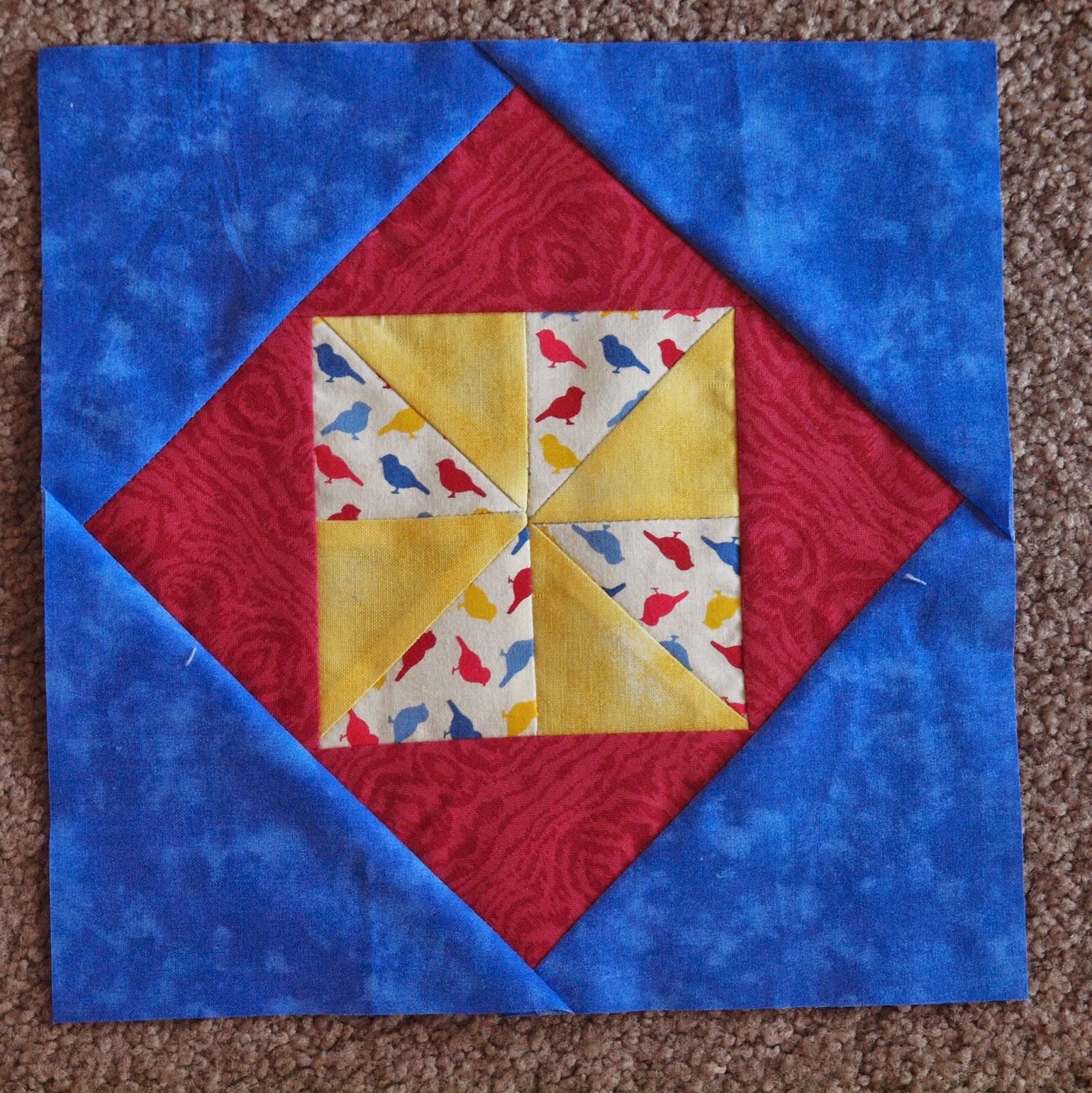 As you can see, all of this doesn't go far towards making a twin bed topper so I have a long way to go! I will probably continue making more triangles before moving on to the next step.
Here are the rest of the steps - if you'd like to join in, Dawn and I would be happy to have you join us.

5. using some of the fabric in the first border make another border of your choice

6. make a border that has squares in it; 4 patch, checkerboards etc would be welcome here. again have fun

7. finish as you wish. this can mean another border or if you think you are done, quilt and bind up the baby.

For now, I'm linking up over at Dawn's blog. Why not pop over there and see what she is up to? I believe she is still working on her quilt from the first round as well as having started another!

See you when I get home from holidays/vacation!
Posted by Lynne at 6:17 pm