playing in the scrap heap

I was going to post my bi-monthly knitting report but I hadn’t taken any photos before I put three shawls into soak for blocking. Then I remembered that the man was coming to hang our new curtains tomorrow and probably wouldn't appreciate having to walk around my knitting while it was blocking on the living room floor. So the knitting continues to soak and blocking will have to wait until after the new curtains are hung!

I haven’t done any sewing at all for nearly three weeks, due to an unexpected trip north, then house guests during a four-day conference, followed by a planned trip to spend a few days at the beach with my mother, sister and some of her family, plus DD and the Grandboys. For the past four days I have been almost unable to move due to the pain in my gut which I had hoped was a 48-hour bug but obviously isn’t!

I had planned to sew yesterday and today but it hasn’t happened. As Lindsey, from Sew Many Yarns, points out in this post: It's very confusing when I haven't worked on a project for a while and it seems to take an age to get my brain back into gear.

I know just what she means. I was on a roll for the first three weeks of September and achieved a lot more than I had planned. But now that I’ve stopped, I have trouble remembering what I was doing!
Let’s take a trip through the month:

By the fourth of the month I had finished my Something New project – a scrappy orange braid made from forty six 2.5” x 7” scraps. Orange was the colour of the month for September at the Rainbow Scrap Challenge over at SoScrappy blog.

But I quickly found that it’s easier to make two braids than one so I made a yellow one! Yellow was the colour for June so I’m just a few months late (nothing unusual in that)! Then I made a green one and a red one, and a blue one and part of a purple one. You can see them all here on my last post.
So that’s where I’m up to with that project. I plan to take the completed braids to class next Monday with some sashing options and start putting them together into a quilt top. I would have liked to have finished the purple braid before then but it seems unlikely!

I cut way more orange and yellow strips than I needed so I found myself wondering what to do with the excess. I decided to sew them together in sets of three and square them off. I could have used them as rail fence blocks but our quilting group gets a lot of those so I had a long think about what I could do with the squares. I finally settled on a disappearing nine patch quilt. Unfortunately, I didn't have enough neutral background fabric to make a nine patch with all the same sized squares so I modified the design so that I could use what I have (that's the challenge of working from donated stash). Here are the resultant blocks before the nine patch disappeared. 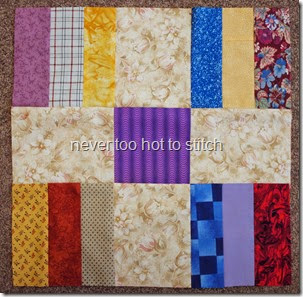 Here are the blocks after cutting. 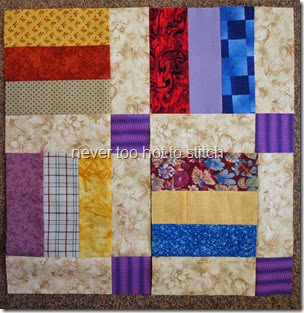 And here is the quilt top on the classroom design wall (I don't have one at home yet!) 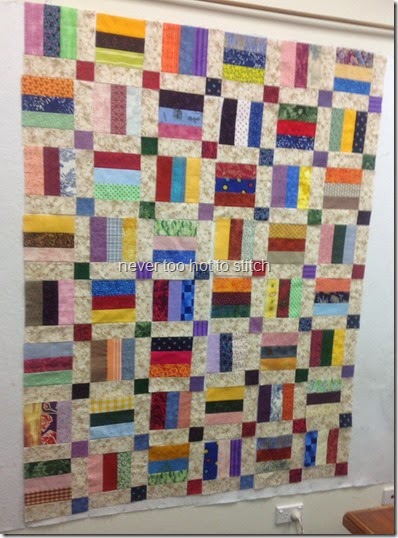 While all that was going on I also pieced the fourth foundation block for my row-by-row Pretty in Pink quilt and started piecing the tumblers into what will be a ‘honeycomb’ pattern. 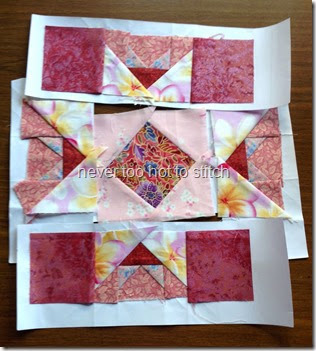 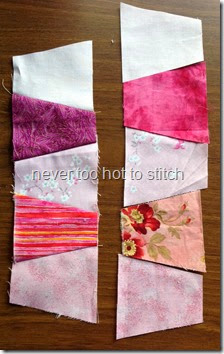 My leader and ender project involves sewing 2.5” squares in pairs of a light fabric and a dark fabric with the idea of making a Jacob’s Ladder quilt ‘some day’. So far I’ve made 60 four-patch units; I need 100 before I can move on to the half-square-triangle units. 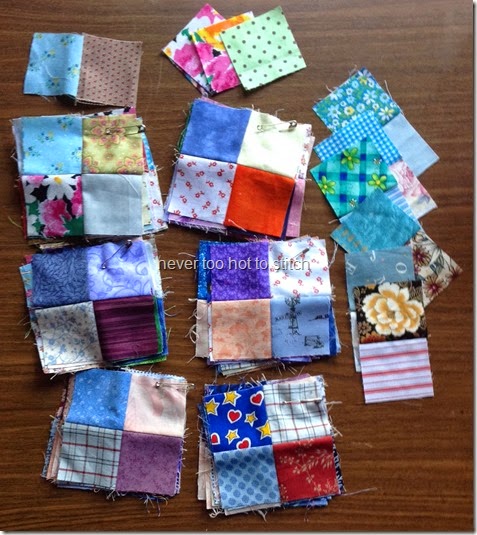 The rest of my time in the 'sewing room' was about getting organised. Until recently, I have stored all my scraps – strips, rectangles, squares, triangles and odd shapes – unironed, in plastic shopping bags, by colour. These are some of my blue scraps after I started ironing! 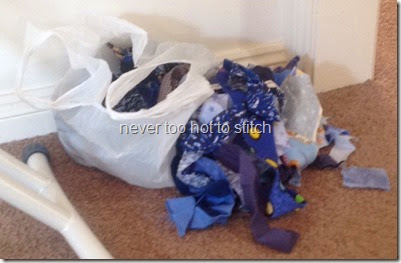 Throughout August and September, I had been ironing many of my scraps and have realised that I am more likely to use them if they are stored by shape and size rather than colour.

I’m not really sure at this stage how that will pan out – I think that I will only keep odd shaped pieces and pieces smaller than 2.5” inches in colour groups and use those as the basis of future Rainbow Scrap Challenge projects. All other scraps will be sorted according to shape; and If I have a lot of any particular size and shape I’ll store those in their own separate container. Obviously this is still a work in progress and there’ll be other posts about this as I see how it works! At the moment I have small plastic trays of scraps and little piles of scraps all over our family room (which is also my sewing room).

And, now that it’s October, the colours of the month are brown and black. I’m thinking I might give this a miss; not because I don’t like these colours but because I already have way too many projects on the go and no plans to start another! WM and I are going away from 21st to 31st October so that only gives me ten days more of this month. With WM home every day on annual leave, I doubt there’ll be much time for sewing at all!

So now, forgive me while I remind myself where I’m at:
Rainbow Braid quilt
-- finish the purple braid
-- choose some candidates for sashing fabric
-- take finished braids to class, audition sashing, trim braids, cut and attach sashing
Pretty in Pink row-by-row quilt
-- make at least two more foundation pieced blocks
-- finish piecing the tumblers
Scrappy Strippy (disappearing nine patch) quilt
-- make backing
-- baste, quilt, label and bind
Jacob’s Ladder quilt
-- finish piecing four patch blocks
-- cut 5” blocks in light and dark printed fabrics for HST
-- sew HST and trim to size
scrap sorting and storage
-- make a decision about how I want to store my scraps (by size/shape or by colour)
-- bring the bookcase we were going to give away back into the sewing room
-- store the scraps and give WM back his sofa (not that he's had a chance to sit on it since we moved!)

Well, that’s where I’m at.
What about you? What are you working on at the moment?
Posted by Lynne at 6:14 pm