The Museum of Sydney

(Re-titled post since it appears no one wants to read this one under the misapprehension that it is the same post as yesterday! )

If you want Part 1 of this story, you can find it over here. It tells of our first night in the city, with photos of the fantastic views from Sydney's tallest building.

We woke up late on our first morning in Sydney. We had eaten very well the night before so neither of us was particularly hungry. We hung around in our hotel room for a while, enjoying the view and deciding what we wanted to do. Meanwhile, WM took more photos (using a zoom lens)  from the balcony. 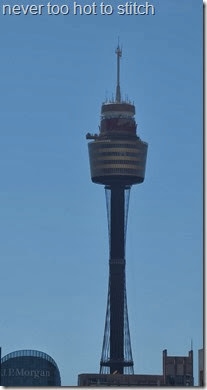 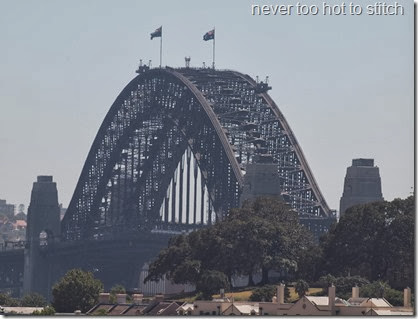 We finally decided to visit the Museum of Sydney, which opened in 1995 but neither of us has ever been there (I told you we don't get into the city much). The museum is built on the site of the original Government House, which was build during 1788, the first year of British colonisation. The museum was fascinating (both of us love this kind of history). We were allowed to take photos of most of the exhibits inside the museum so here are just a few of WM’s collection!


This full size replica of part of the facade of the original Government House is in the foyer but doesn't make any sense until one has been inside and seen the information about the first Government House. 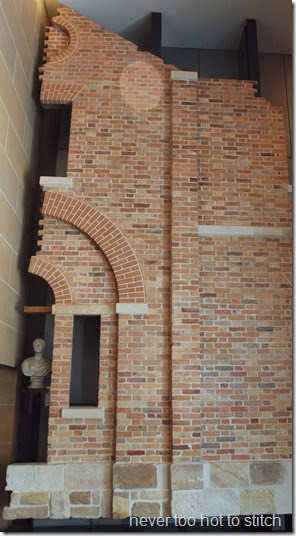 As you can see, Government House was a two story building. It was built as the home of the first Governor of the colony, Arthur Phillips, and subsequent governors for about fifty years until it was demolished in 1850 as unfit for human habitation.  WM and I were quite disappointed to read that – we though it was a lovely-looking building and a fine example of colonial architecture. It appeals much more to our taste than the ornate Gothic-style building which replaced it.

The original house was the two-story section (without the veranda) seen at the front right of the photo below (of a model of the house).

It was added to by successive governors and was a grand house but always contained structural problems, due to the original part of the building being hastily built by unskilled labour (the British Government of the time gave no thought to finding convicts with the necessary skills to build a new colony before transporting them). One of the loveliest features for me was the curved wall of the dining room, as seen in the photo below. 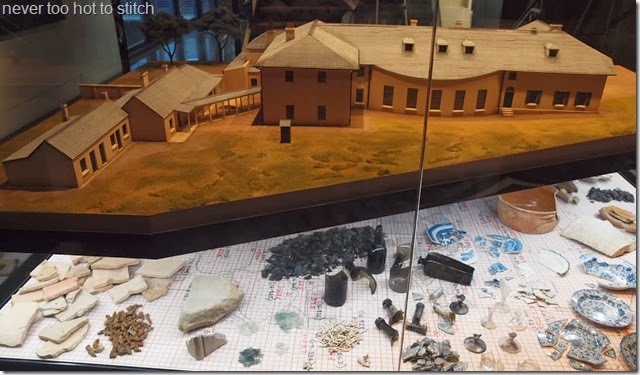 The kitchens are in the building joined to the house by the covered walkway and the other smaller outbuilding housed the laundries. The photo also shows items found during the excavations which began in 1983, 84 years after workers on the site discovered the foundation plaque from the original building!

The next picture shows a drawing by colonial artist, William Bradley, of the house as it originally looked. I am intrigued by the proximity of the water and the gentle slop of the land – Sydney has reclaimed a lot of land since them and the museum building, erected on the same site, appears to be on much higher ground. 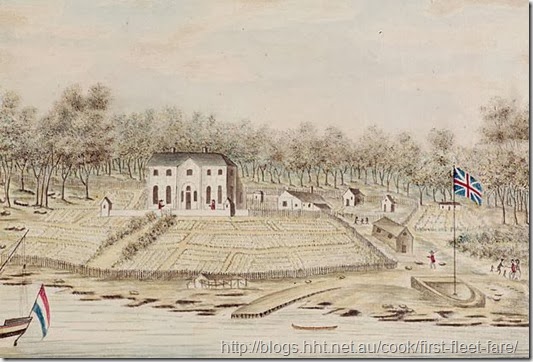 Another area of interest inside the museum had to do with food served in Government House  – furnishings, table settings and cookware as well as the kind of food itself. 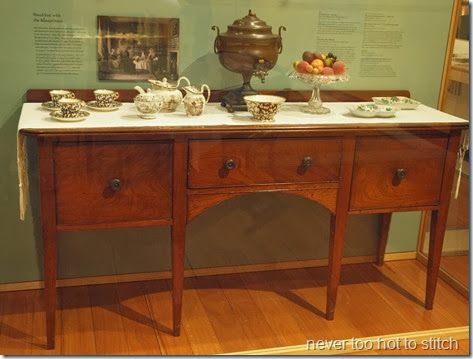 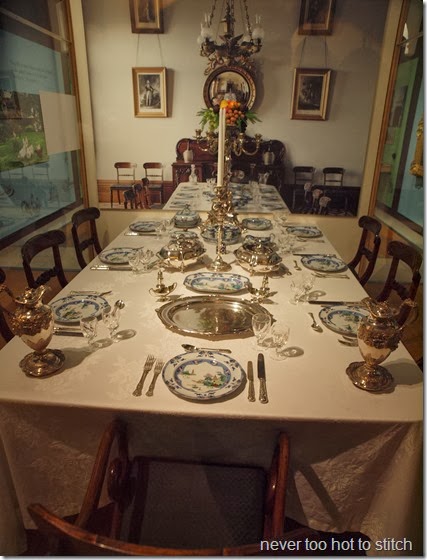 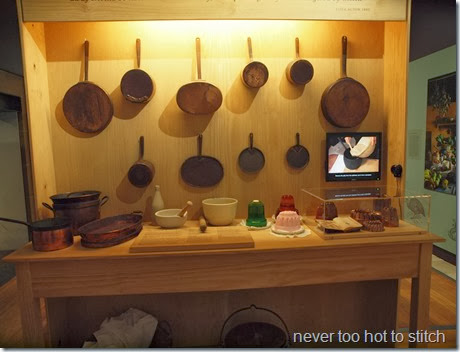 a suburban kitchen from a later period 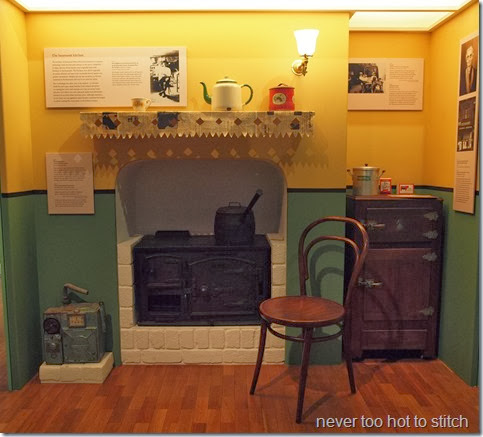 And a personal favourite for me: a TeasMaid – my parents brought an identical one of these to Australia from England; it was a wedding gift. It sat on a table on my father’s side of the bed and they used it daily for many years – mum poured the tea while dad got ready for work. Surprisingly, they were able to replace it with another which my mother still has but I doubt she uses! The water boiled at exactly the time the alarm went off and made its way from the kettle on the right to the teapot on the left. Purists wouldn’t like it – the teapot was not warmed before the tea was made! 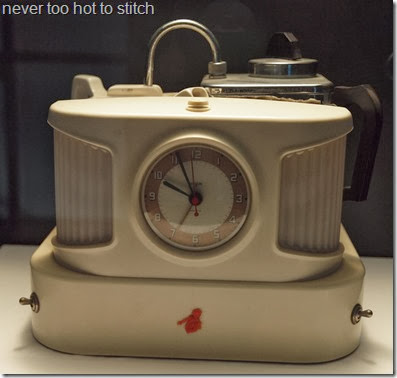 The Sydney Harbour Bridge opened in 1932 and there were many commercially available souvenirs but Australia, like the rest of the world, was still in the throes of the Great Depression so handmade souvenirs were also produced, like these two – one made from shells by an Aboriginal woman and sold to tourists, the other from two wire coat hangers. not surprisingly, one of the nicknames of the “The Bridge” is “The Coat-Hanger”! 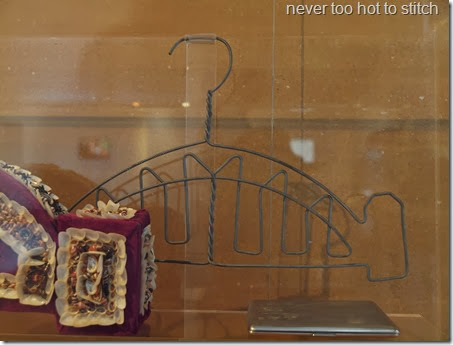 The following photo is of a plaque made to commemorate the Federation of Australia in 1901, when six separate colonies formed one country! It shows the building erected in Centennial Park where the “onstitution of the Commonwealth of Australia” was signed by Queen Victoria and the first prime minister of Australia, Sir Edmund Barton. 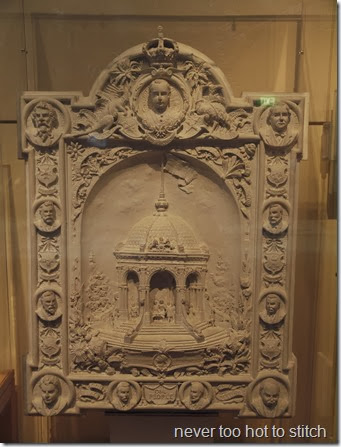 Here is the way that Jørn Utzon, an architect from Denmark, worked out the construction of the ‘sails’ of the Opera House. The building was opened by Queen Elizabeth II in 1973 and is a very famous Australian icon. 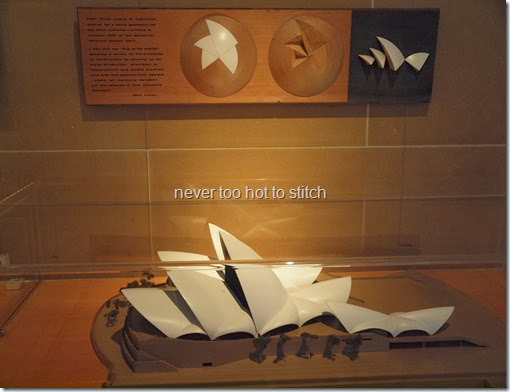 As some of you know, I am very interested in family history. I heard my maternal grandmother talk about “Lady Marion Best” many times but I wasn't sure who she was. You can imagine my delight in seeing a photo of “Marion Hall Best” in the Museum. She was an interior designer who had a small shop in the Sydney suburb of Woollahra. My grandmother retired from her upholstery and furnishings business (see where I get my stitching genes from), Nichols and Keep, in 1975. The partnership worked from Bondi Junction and, apparently, did quite a bit of work for Lady Marion Best. 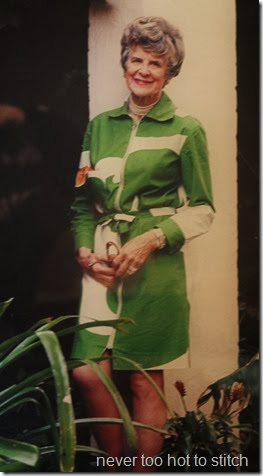 We enjoyed our time at the museum very much and were disappointed to have to go, but it was time for our next adventure – Sydney Jet Boat.

Naturally enough we couldn't take a photo on a boat skidding, sliding and doing u-turns across the choppy waters of the Harbour, so this is a photo taken by WM the following day as the boat returned to Darling Harbour. As you can see, the passengers are very wet. We weren’t too wet – we wore the ponchos offered to us! We had a great time, thirty minutes well spent!

Come back tomorrow for the final part of this thrilling saga…LOL
Posted by Lynne at 1:50 pm