warning: long, photo-heavy post!
Last week, WM and I were away from home for a couple of days. Although we live in the outer suburbs of Sydney, we rarely visit the city itself. We decided that for our anniversary (3 December) and Christmas gifts to each other, we would play tourist in our own city.

WM finished work at 2:15 on Thursday afternoon and by 3:30 we were on a train heading to the city. We had booked a one-bedroom apartment overlooking Darling Harbour which is, in itself, part of beautiful and extensive Sydney Harbour. This map shows the extent of the harbour – it is thirty kilometres (19 miles) from the heads on the right to the weir in Parramatta. The city itself is where the words “Circular Quay” are written on the map. 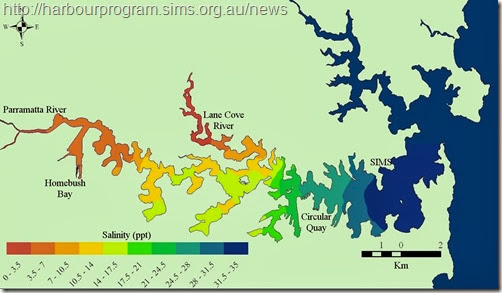 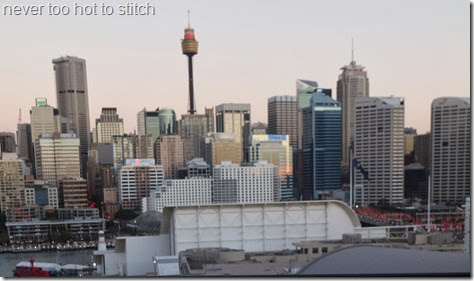 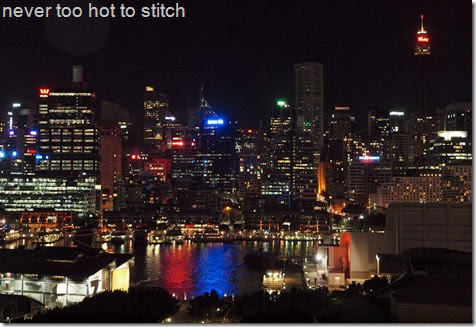 or north along Darling Harbour towards “the Bridge” 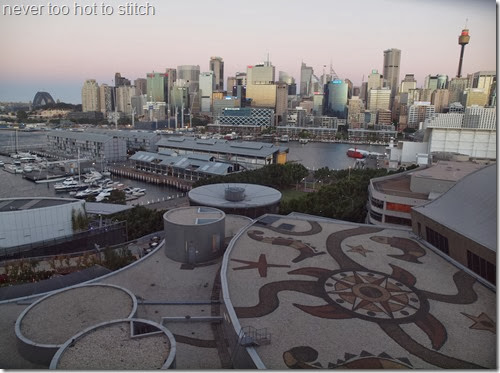 Yes, Carol, that is artwork, done in pebbles as far as we could tell from four floors above! 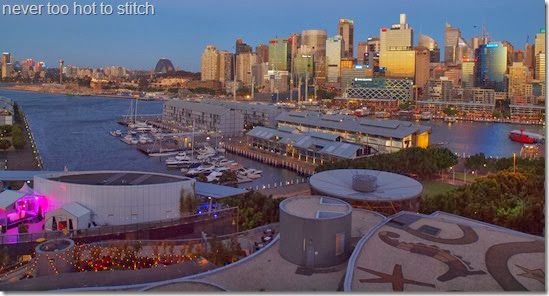 We walked into the city to have dinner in a revolving restaurant at the top of Sydney’s tallest building (the tower seen in the photo of the city skyline). The food was great, we tried most things on the buffet (small samples only) and the company fantastic but the real reason to be there was the views of Sydney and beyond. The weather had been very warm, 30°C (88°F) plus for over a week, so there was a lot of haze. The windows were not as clean as they could be (salt laden winds) and the reflections of the inside of the restaurant in the enormous windows didn’t make for great photography but I’ll share some of the better ones with you.

The first is looking towards North Sydney. The circular building in the foreground was the tallest building in Sydney in 1969. The big windows at the top are outside a revolving restaurant (although I’m not sure if it still operates given the number of taller buildings around it now). 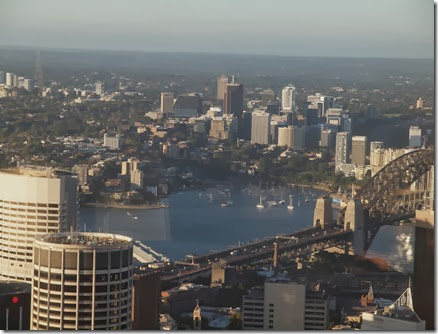 And here it is by the time we came around again, about 45 minutes later. 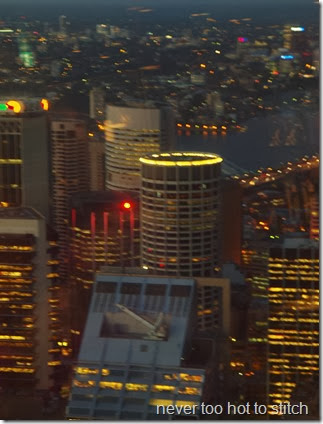 The next photo is the view across Darling Harbour towards our hotel, which is in the top right of the photo with the triangular shaped light on top of it! 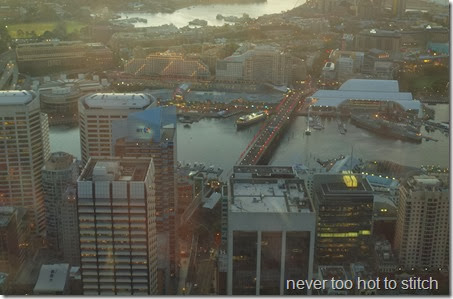 You can see our hotel more clearly in this photo, it’s the building that says “The Star” (Sydney's only casino, and no, we didn’t go near the gambling facilities). We were in the end of the building closest to the centre of the photo. (Sorry about the reflections from inside the restaurant!) 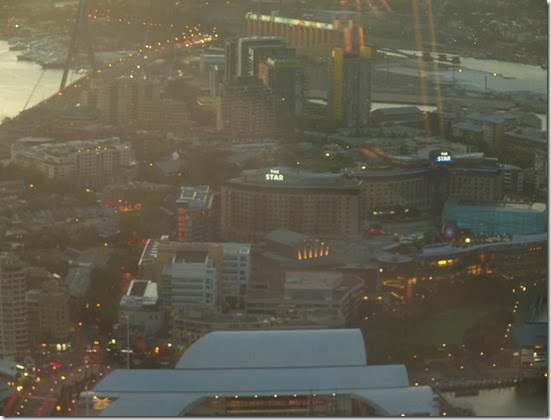 The next photo shows a ferry just coming into the part of the harbour known as Darling Harbour, which is where our hotel was located. 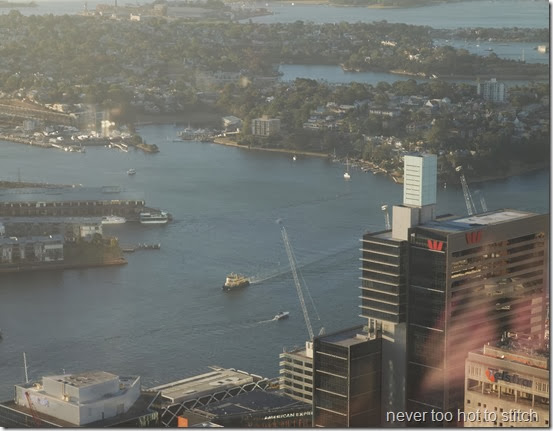 This a photo looking towards The Heads – the entrance to Sydney Harbour. Outside is the Pacific Ocean (well, officially the part of it known as the Tasman Sea, between Australia and New Zealand). In 1770, Lieutenant James Cook sailed past these heads and noted that there was an entrance to a “small harbour” – little did he know what was really hiding inside that small opening! The vintage etching shows the true size of that “small” harbour”! 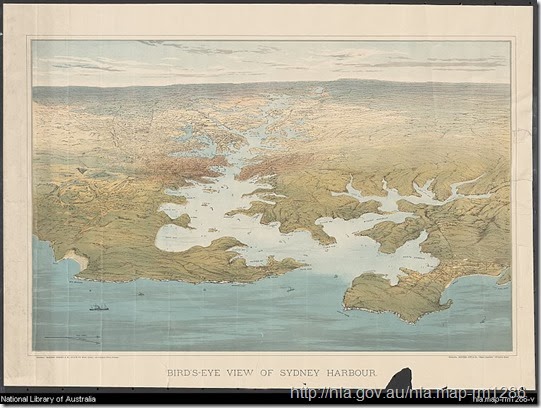 We chose to go for dinner so that we would be there for sunset (romantic except, perhaps, when you're sharing dinner with a camera and a blog). You can see the light is fading fast. This is a view over the eastern suburbs as they catch the last rays of the sun. Those tall buildings in the background are at Bondi Junction, which is very close to the world-famous Bondi Beach. 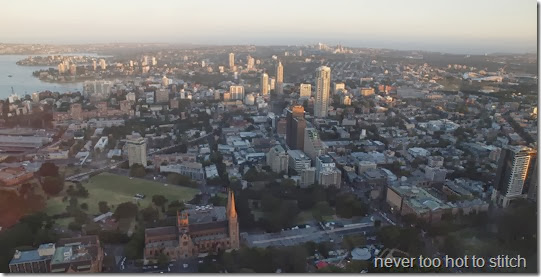 A block away from the shopping complex on which the tower is built, is Hyde Park (named after the place of the same name in London). On the other side of Hyde Park is St Mary's (Catholic) Cathedral. I wanted to get married there when I was a teenager; it has the longest aisle I have ever seen and I had visions of Julie Andrews as Maria heading towards the Captain in the wedding scene from The Sound of Music! Alas, no long train for me! My dress was much simpler. When I was a young teenager, the cathedral has no spires, they were added in 2000.

The green circle on the left of the next photo and the white circular ‘building’ on the right of the photo are temporary, they are part of the Festival of Sydney which runs over sixteen days in January (summer break here). The green circle holds an inflatable full-size replica of Stonehenge called “Sacrilege”; it’s pretty big, look at the size of people next to the ‘stones’. 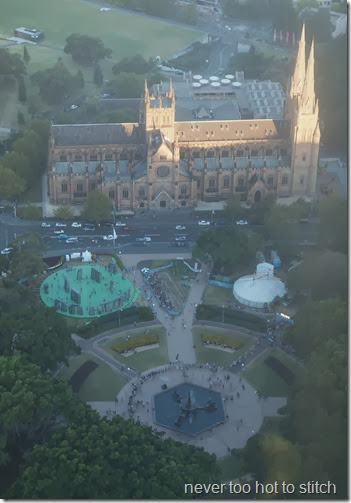 So, to finish our photos from the Sydney Tower Buffet Restaurant, one of the shots of the sunset that we managed to get; looking over Darling Harbour. Our hotel is the one with the big blue light area in the centre of the photo; that’s the Sky Terrace rooftop bar in action for the Festival of Sydney. 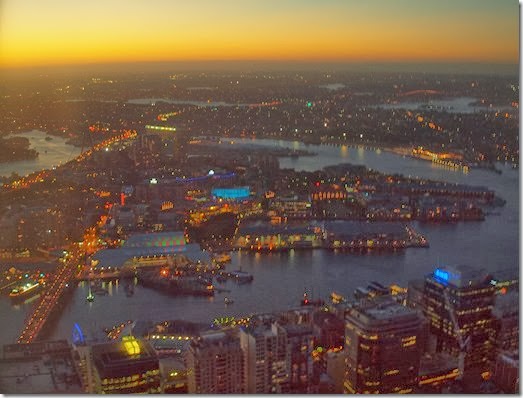 It was a warm night when we came down from the restaurant at about 9:00 so we decided to wander over to Hyde Park and see what was happening. WM was, as usual, taking arty shots but I was entranced by the guitar playing of this young man whom I had never heard before. 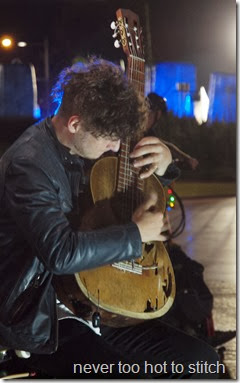 His name is Tom Ward and yes, his guitar really is as battered as it looks. We bought a CD and tried to say something intelligent but you know how it is when you’re awestruck by someone’s brilliance. Hop over to his website and listen as he performs his own composition on Australia’s Got Talent. I’d offer you a video from YouTube but I think this post is long enough all ready!
On our way back to the hotel, we passed the Hermès shop and two of the windows caught our attention. The first contained these old skis and poles; the second contained these kangaroos made from torn (cotton) paper by Anna-Wili Highfield. I thought they were amazing! (Take a moment to go over to her website and look at her works – stunning!) 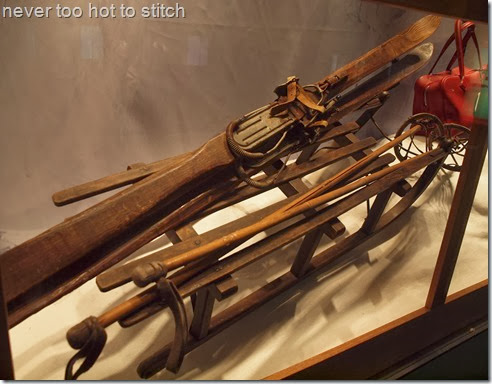 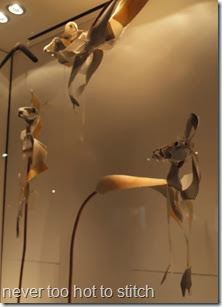 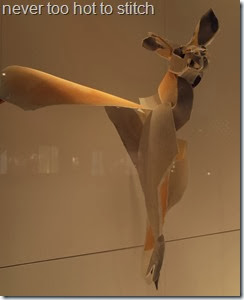 So that’s it for the first few hours of two and half days! I guess there’ll be another post later!
See you then in our amazing city!
Posted by Lynne at 12:21 pm