a day on the harbour

If you’re looking for the first post in this trilogy, you can find it here.
The second post can be found here.

Thanks for sticking with me -- I know many non-Sydney-siders appreciate the photos of our beautiful city. And I’ve shown you only a few of the vast number taken! ;-)

After a lovely buffet breakfast at our hotel, WM and I checked out and left our bag with the concierge to take advantage of the beautiful weather. We caught a ferry from Darling Harbour to Circular Quay. This photo of the ferry arriving at the wharf was taken the previous morning from our balcony. The vessel in the background is moored outside the Maritime Museum which we have never visited. 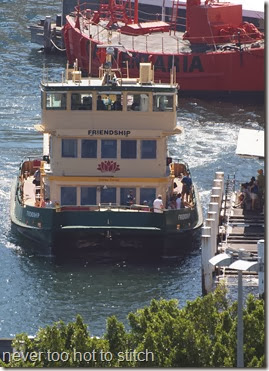 Coming into Circular Quay, we saw this massive cruise ship, the Carnival Spirit. You can only get an idea of its size when you see it with the Harbour Bridge and/or the Opera House in the background.

Sailing away from Sydney Harbour, the buildings looked like they were falling! Funny how our eyes play tricks on us sometimes, isn’t it? The building with the curved facade (on the left of the photo, behind the ferry) was the first skyscraper in Sydney – at fourteen stories it dwarfed all the other buildings for years! When I was in (junior) high school, it cost 20c to travel to the observation deck at the top of the building! 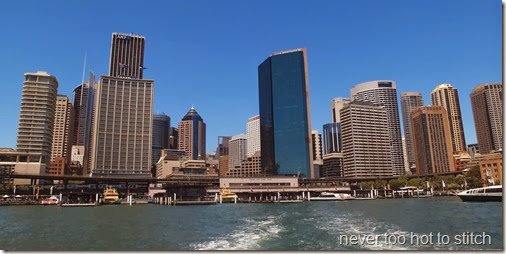 This iconic building in its beautiful setting needs no introduction, does it? (That cruise ship still looks enormous, even from this distance!) 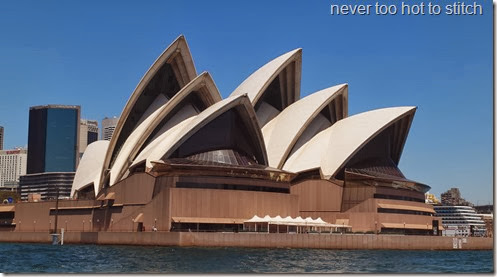 And this must be one of the most well-known pictures of Sydney!

We decided to go from there to Watsons Bay but, being summer, school holidays and a Saturday, found the place way to crowded so we didn’t stay long.
When we got back to Circular Quay, we decided to avoid all the crowds and catch the ferry back to Darling Harbour and go home! I could see WM was disappointed with that decision, so we got off the ferry at Balmain East, where we sat in the shade (it was very hot and we both had been sunburnt but weren’t aware of it yet) in a small park, close to the wharf. it was so nice to be away from the crowds (you can see we are really not city people!). I lay on the hard park bench, WM took yet more photos. The first is of Sydney Observatory. 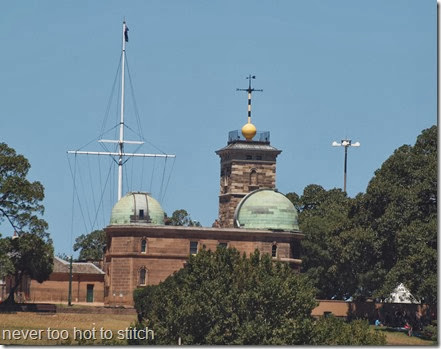 The next photo is of an historic area of Sydney, known as The Rocks, site of the first British settlement. This is a less well-known, less tourist-y part of The Rocks. The area in front, where the excavators are, is known as Barangaroo, and is under development. There is to be public park and, I’m told, another casino. Given that this is Australia Day, the 226th anniversary of the landing of the First Fleet in Sydney Cove in 1788, this photo is very appropriate.

The last photo is of the ferry (we had been on previously) going back out of Darling Harbour (passing the park in Balmain East) into the harbour proper. That’s the Barangaroo development in the background, 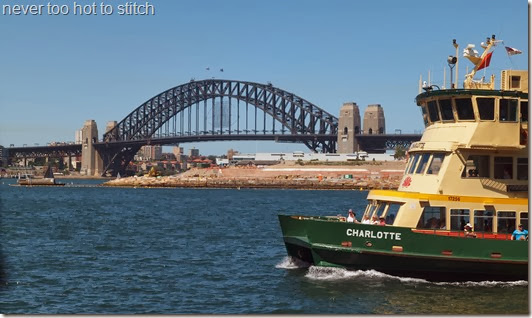 Around 3pm, we suddenly realised we were hungry so caught the ferry back to Darling Harbour and found somewhere to have a nice salad for “dinner”.  All too soon it was time to collect our bag, catch the tram to Central station and a train heading west. We arrived home at 6:30pm, tired but happy. It had been a great few days but we were in no hurry to visit the city again for a while!
I hope you’ve enjoyed these posts; this last one finished like a primary school composition (“What I Did on the Weekend”)!
Normal crafting posts will resume shortly.
Happy Australia Day to all my fellow Aussies!
Posted by Lynne at 9:38 am