progress is being made

So far I have worked on only three of the eight items on my January list.

But I am happy with that, considering I had house guests until 9th January.

I have cast on another pair of socks -- these don't interfere with my Year of the Finished Project. Plain stocking stitch socks, single-coloured garter stitch squares, class samples/projects and rainbow scrap quilting blocks are exceptions and are not counted as new projects. 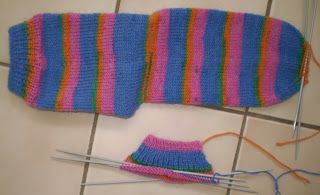 You will no doubt notice that the toe of the first sock has not yet been grafted. That's because it's easier to cast on for another sock while in the car than to try grafting while in a moving vehicle!

Socks make great travel knitting: they are small and easily transported, they don't lie in my lap when the temperature outside is over 35°C (95°F), and because they are knit in the round on dpns are only ever sixteen stitches from the "end of the row"!

Many of you would have read that my first "finish" of the year was to "frog" (rip out) a baby sweater I started in November 2011 because I thought the head hole was too small after I knitted the collar on. That's one thing off my Focus list, even if not the way I originally intended.

My "big" knitting project is the Westall cardigan that I am making for myself. I planned to be up to the waist shaping a few days ago but had to extend that deadline to yesterday because the cotton/acrylic yarn, while knitting up into a nice soft fabric, is hard on my hands so I can only do a few rows before I have to take a break.

I did reach yesterday's deadline and have started the waist shaping but I'm beginning to have my doubts about having this finished by the end of the month! Nevertheless, I will persevere, I will soon be up to the plain stocking stitch part of the body so it should go a little faster then!

And on the quilting front, I started thirty-two square-on-square blocks last Friday and finished them on Monday (I had no time for sewing over the weekend). I only needed thirty-one but it doesn't hurt to have one extra, just in case. Yesterday I sewed the blocks into rows and the rows into a flimsy, so I have met my goal for January for this project and need to turn my attention to other projects while I think about the borders for this one. 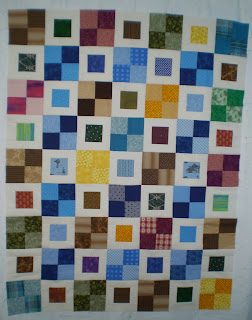 I think I'll use a thin blue solid inner border but I'm not sure about the outer border. Strips (piano keys) with corner stones?

Time to baste this baby, I think. Eight months in the waiting pile is long enough!

So, how about you? How are you going with your January goals?

Linking up with WIP Wednesday over at Freshly Pieced (hosted by Lee).