Is frogging a finish?

In November 2011 I cast on and knitted the body of a sweater for a 12 month old child. It took me only a few days to knit but then I put it aside because I had to pick up stitches around the neckline to create a collar.

Cue 2013. This was the first project on my list of UFOs that I decided to finish.

(Having house guests makes it impossible to get into the sewing room but knitting and conversation go well together).

First I checked on the Internet for the correct way to pick up and knit stitches.

Attempt one
messy pick up, 80cm (32") circular needle too long for the job

Attempt two
The picking up of stitches was much neater but it was still difficult to get the same number of stitches down each side of the collar. Knitted this time on dpns -- dropping stitches was an issue. I had almost completed the collar and decided I had picked up stitches the wrong way (even though I had followed the pattern instructions). Frogged. (Then realised I had been right all along!)

Attempt three
This time I picked up the stitches using a tiny 2mm crochet hook. While still struggling with losing stitches from dpns, I managed to get the stocking stitch collar (as stated in the pattern) finished. No matter what I did, it would not lie flat. Of course not, stocking stitch curls! They must have severely blocked the sweater in the photos for the book to get the collar to stay like that! Of course, I could block but what happens when the new mother, unknown to me, washes the garment and doesn't know about blocking! Highly unsatisfactory; you guessed it - frogged!

Attempt four
I decided to knit a garter stitch collar. Still struggling with stitches falling off dpns, I didn't realise that I had created two slipped stitches, right in the centre back, on the right side of the collar. 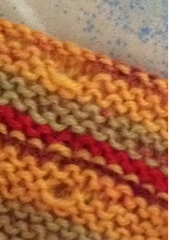 I like the garter stitch, it lay perfectly, but I still didn't like my messy pick up of stitches.

By now I'm sure you can tell that I don't tutor on finishing knitting! I'm still working on that for myself!

I convinced myself that the two stitches weren't too bad and, once baby's head was in the jumper, they wouldn't be seen. Which brought me to the size of the head hole -- there is no way that either of my grandsons would have been able to get their head through that hole. Sure, the jumper could be given to someone with a small baby but how long would the child be able to wear it? Better a slightly oversized cardigan (and therefore no head hole) than a garment that a child grows out of long before it wears out!

It's a very long time since I've been defeated by a pattern but there it is.

And so we come to the crux of my post -- is frogging a finish?