getting organised on <s>paper</s> tablet

I have so many stitching projects "in progress" (read "started but going nowhere") that I have been feeling overwhelmed which leads to the easy option - fall back on the knitting and concentrate on one project! In this post in June and in this post in July, I listed many (but not all) of my WIPs. However, just knowing how many projects I had on the go wasn't helping me get moving on most of them any more than focusing on just one knitting project will see my sewing completed!

Privately, I tried listing all the things I needed to do to bring some of the projects to completion but that, as you can probably imagine, just made things even more overwhelming. Then, in the first hours of daylight last Thursday morning the solution came to me. What if I list each project and just the next task that needs to be done on that project? I could cope with just one thing, the next thing, couldn't I?

After trying my notebook app (which I love for taking notes and storing PDF files), a couple of spread-sheets and  the built in reminder app on my iPad, and rejecting databases as too complicated, I decided to type "lists" into the search box in the App Store. I found lots of interesting things, and even tried a couple but the app I have finally settled on is simply called "Errands" and, so far, it does what I need it to do.

It's a full application, not a lite version (another app I tried would only let me list 30 items in total). With this app, I was able to list more than 30 items which I chose to put in two folders -- "works in progress" (meaning I had done something towards starting the project beyond planning) and "projects to go" which are projects I hope/plan to start soon.

The app had a place for me to write the name of the project and some details if needed. I was able to assign  it a high, medium or low priority, and where necessary, set the date (and time) for its completion. 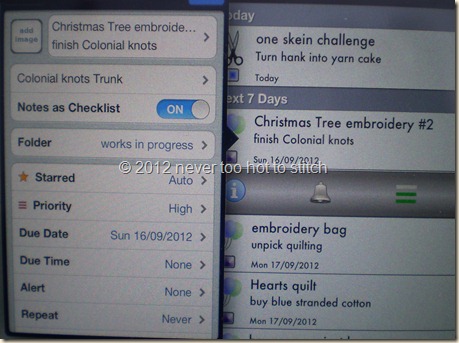 Then I was able to sort my projects according to priority, due date or just list them in alphabetical order (as seen here). 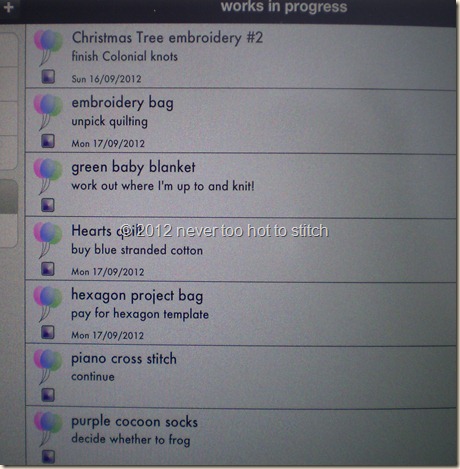 Or I could manually sort them according to my own personal criteria.

I could put a little star to tell me which projects I want to focus on and even have the app put an auto-star on the project for me (I have set mine to add the task/project to the focus tasks fourteen days before the due date but there are other choices). This then feeds into a folder called “focus” which is just what I need – something to help me focus on one task (not project) at a time. How can I not see what I need to be working on when it’s this clear? 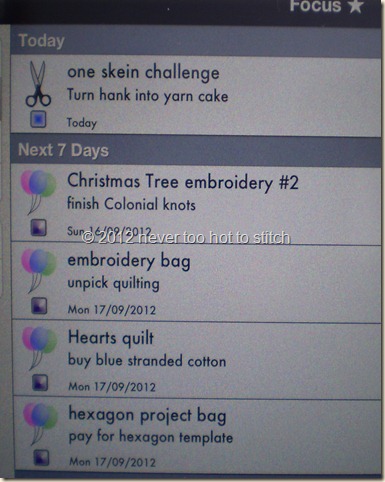 I spent an hour or so on Friday morning setting due dates for my projects – this will help as they get closer and the app sorts them for me! Items like donation blankets and warm clothing don't need to be finished until the end of April. Likewise, all the quilts for Caring Hearts Community Quilting Group need to be ready to go by the end of March.

Each task can even have its own checklist within the notes section. Here are my notes for my Christmas Tree embroidery #2. These are the two thinks I need to do to complete this embroidery.

If I wanted to, I could have an alarm to alert me to the fact that a task is now due -- and there is a large choice of different alarm sounds! I could even choose what time I wanted to receive that alert!

The app has a logbook which records when tasks have been completed so I can look back and see how much I have achieved (or not) in a given time period! As you can see, when I took this photo I had only completed one task, and that was on Thursday afternoon – but give me a break, I only found the app and installed it on Thursday afternoon!

And the logbook tasks can be used to create another task for the same project. So, for example, I write that my next task is to cut and iron the binding for an I Spy quilt. I complete the task and check the box. I can then copy that project to a new task in the folder of my choice and change the task to machine-sew the binding to the quilt and set up a new set of time limits and priorities (if I want to).

I admit that it did take me quite a few hours to try different many ways of recording the projects I have underway and the next task needed for each of them but that was because I tried many different ways until I found the right app for me. This sounds like time-wasting but in the end, it should save me time. I like this kind of organisation – it helps me to see clearly what I need to focus on!

The only thing I would change about this app is I would love to be able to assign a different date to the next task and the due date for completion of the project. But this is not what the app is designed for so I’m asking a lot! 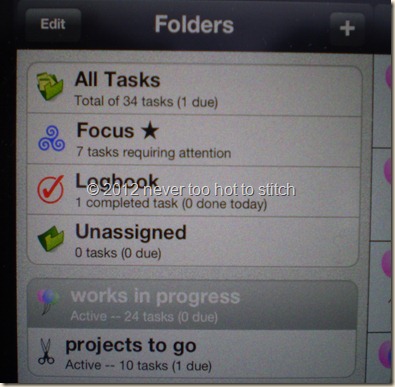 All in all, I'm very happy with the app so far (at the time of writing this post I had only been using it for about 24 hours). I'm not sure that David Mandell, the app writer, had craft projects in mind when he wrote the app but it's a comprehensive way to keep track of what has been done and what needs to be done and when! Best of all, it's a full app for free!

Thanks, David! I really appreciate your expertise. I, for one, would have no idea how to go about writing an app!