I have been stitching -- a bit of this, a little of that -- but not much that's interesting to show.

My last "stitching" post self-published while I was away last weekend at a very enjoyable Christian women's conference at Katoomba in the Blue Mountains, west of Sydney. The conference speakers were interesting, all the food was delicious (especially the Chinese banquet on Saturday night), the accommodation was comfortable even though very basic and the shower was hot -- which is always a bonus!  But I think the best thing for me was the group of women whom I met -- what a great bunch of ladies. Thank you so much, M, for inviting me to go with you. I am looking forward to next year already!

Anyway, back to the stitching progress. My sewing machine has not even been taken out of its travelling case since class on Monday 3 September. I had a very full week last week, with no time for machine sewing. Unthinkingly, I allowed myself to become dehydrated over the weekend of the Conference so by Monday I had a raging headache and couldn't attend class. 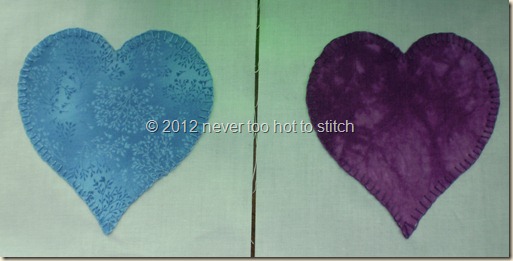 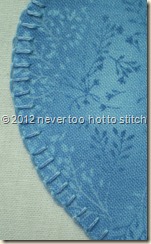 and almost finished my second Christmas Tree embroidery in class this past Wednesday, but I'll leave a photo of that for another post.

On the knitting front, I completed one hat while I was away last weekend and another on Sunday night after I got home. The first is a twelve row k1, p1 ribbing followed by stocking stitch -- I didn't want to have something that required my concentration while sitting around the fire (okay, it was a gas heater) last Friday and Saturday nights. Turned out to be the right choice; as I said, the ladies in our group were great company.

The second hat was knitted at home in front of the television -- I was obviously tired because I had to tink back more than once in the first few rows! The pattern is the Crenellated Hat (Ravelry link) by J Wilson from Brainfork blog. I found the pattern on Ravelry and thought it was a good unisex pattern to go with my choice of chocolate brown yarn (which is nothing like the colour on the photo). The pattern called for two repeats of the Crenellated pattern but I only did 1.5 repeats -- WM thinks its big enough and it will certainly fit someone even though it's not as long or slouchy as the one on Ravelry! WM and I both like close fitting beanie-style hats. 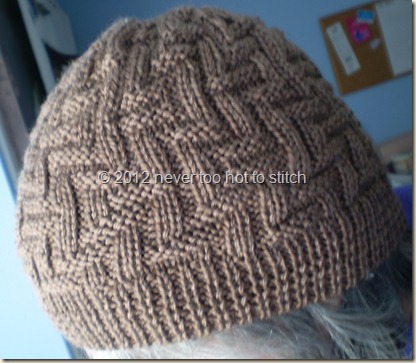 I have been working almost daily on my intarsia blanket (I am looking forward to completing it, I feel like I've been working on it forever!) but I won't bore you with more "in progress" photos. 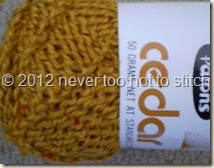 I have also cast on another Blankie for an animal adoption agency using yet more of the Patons Cedar yarn which was donated to the knitters at my MIL's retirement village, where they only knit baby items and I get the unwanted yarn. I didn't really want another knitting project on my needles just yet but DD and family came to visit yesterday and having twenty skeins of yarn within reach is just too much excitement for Younger Grandson; who is also fascinated by the metres of different coloured yarns hanging off the blanket. It's just easier for both of us if I have a one-yarn-project on the go when they're here!

Here is a small piece of knitting (16cm x 8cm) I started on Wednesday and finished on Thursday. It's in linen stitch which I had forgotten is very stiff and tight and should be knitted on larger-than-usual sized needles. I didn't and this is almost rigid but that's okay, I think it will suit the purpose for which it has been made .... Stay tuned! ;-) 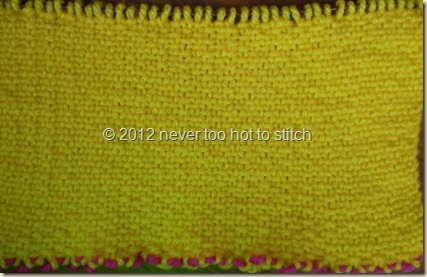 These are the two sides of the fabric in close up. The left photo shows the correct side of the linen stitch but I also like the reverse side! 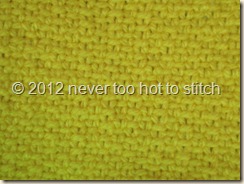 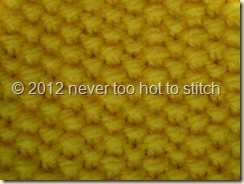 Today I will wind my new skein of yarn into a yarn cake and cast on my "secret" project -- my entry into the One Skein challenge run by the local group of the Knitters' Guild. These items will go on display at the meeting on 20 October and the winner will be chosen by popular vote. As I understand, no one is supposed to know who knitted what and since several people from the Guild read my blog, I need to be very secretive indeed! LOL

Are you doing any hand stitching?