Impera Magna, over at The Adventures of the Empress of the Universe, was tagged to answer 11 questions and then posed eleven more for anyone who wanted to answer them.

I thought they were a bit of fun so here goes (I’ve reordered the questions, Freda, I hope that’s okay!):

1.  How long have you been quilting?
DD and I bought fabric and cut out our first (string) quilt (with scissors) in March 2010. 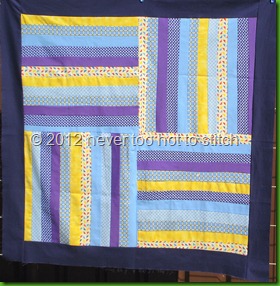 I bought a rotary cutter soon after and we cut out pieces and began Elizabeth Hartman’s Modern Sampler Quilt in April 2010 but it didn’t get finished until we began to take classes in 2011. 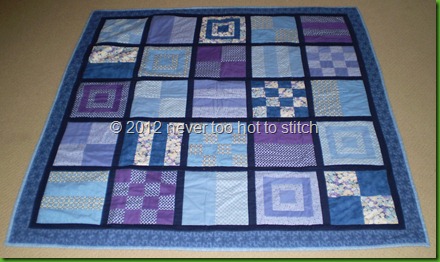 So, I guess the short answer is just over two years, but we have been taking it seriously for about fifteen months!

2.  What quilting/sewing tools do you find most useful?
I would have to say my sewing machine closely followed by a stitch ripper, my rotary cutter and cutting mat. And scissors – I have four pairs in different parts of my sewing room and another pair on my quilting frame in the garage; almost all the scissors are paired with an empty container for throw-away scraps (there are other scrap bins for usable scraps).

3.  Do you belong to a quilt guild?
DD and attended the inaugural meeting of the Sydney Modern Quilt Guild last October but have not been able to attend either of the two meetings since.

4.  Do you have a local quilt shop?
Four – I attend weekly classes at one of them!

5.  Do you quilt your own quilts or quilt "by check"?
So far I have quilted all of the quilts we have made – either on my sewing machine or on the quilting frame. I can’t see this changing in the near future.

6.  How many finished quilts do you have in your home?
Three. The first two quilts we made (both seen above) for DD’s sons; and this one which belongs to the “Caring Hearts Community Quilting Group”. 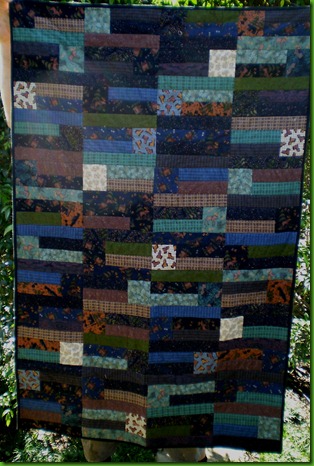 7. What's the farthest you've been from home?
England, in 1983. WM and I plan a return visit to the UK in 2017 to celebrate our 60th birthdays and 40th wedding anniversary.

8. I'm going to take you out to dinner and I'm paying... where are we going and what will we have?
Lobster please!

9. When was the last time you bought fabric?
Tuesday – the local chain store has a discount of 30% off all fabric; this included a discount on the clearance stock which was already marked down to $4 a metre (normally $12.99-$19.99 a metre). I went to buy one and a half metres of fabric to line the bag we are starting in class next week; there was 1.9 metres on the bolt; the other fabric had 3.8 metres on the bolt and I bought the lot! At $2.40 a metre, I can never have enough neutral fabric! 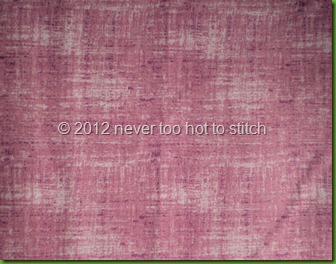 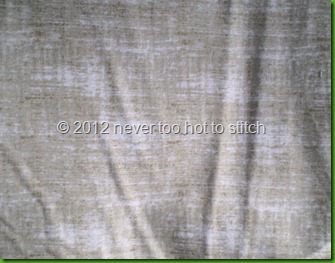 10. Thread... more than 100 spools or less?
Way less. I used to buy a different coloured thread for every project, now I have only white, black, charcoal, two tones of grey, two tones of beige and a spool of brown. Of course, I still have part-spools in other colours but way under 100 spools.

Come back tomorrow when I’ll answer the 11th question!
Posted by Lynne at 12:26 pm