a story of good intentions (part 1)

Hello! It’s been way too long. When I don’t write on my blog, it’s very easy to form a habit of not writing on my blog! Many times I have had a great idea for a blog post but somehow, I just didn’t get to it.

I was going to write on the first day of March about how February had been my month for getting projects finished. I had written earlier in February about my “feeling flat” and that my solution to this issue was to finish some UFOs. It occurred to me that there were just to many UFOs around, and that if something were to happen to me, DD would be stuck with the task of deciding whether to finish them or throw them out. Since she can’t bear waste, she would feel obliged to finish them. We don’t knit to the same gauge so finishing my knitting projects would be a challenge, which would be made even harder by the fact that I rarely use patterns either!

So, in February I got stuck into some of my UFOs and even managed to finish a couple. The quilt and the blanket I have already shown in a previous post. These socks were started on 11th January so they could only be described as UFOs because I got second sock syndrome and cast them aside for something new! 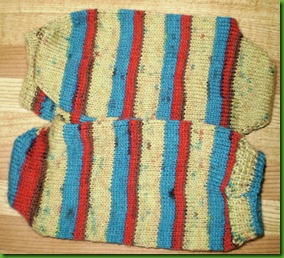 This shawl was a WIP rather than a UFO since Ravelry shows me that I only started it on 16th February! 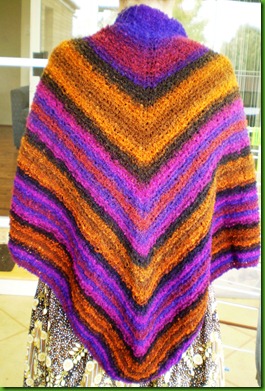 I am easily distracted. We had a crochet workshop at the Knitters’ Guild in mid-February and I caught the bug again. I made a small baby rug from 200g of 8ply (DK) acrylic yarn in girlie colours. I thought it was too small to be useful and too heavy for a baby (I had forgotten that crochet consumes yarn much more voraciously than knitting!). But my worst crochet nightmare came back to haunt me – it would not lie flat. I talked to the tutor of the crochet workshop. I emailed a blog-friend who crochets (Hi, Maria). I took my completed work to the LYS and asked for help. I was encouraged to block it and try my next project with less chains in the corners.

And so, of course, I began another crochet project while WM and were away in mid-March visiting Taronga Western Plains Zoo (hopefully, I’ll write a post about that later). No matter what I did, the curling continued. The acrylic yarn felt stiff and hard and, ultimately, I decided to rip out both projects. Well, actually, DD ripped out the first one for me while I fixed a problem with her knitting, and the second one sits forlornly in the frogpond! Of course, no photos were taken before ripping the first one but here are two photos of the second attempt. The second photo shows the curling problem. 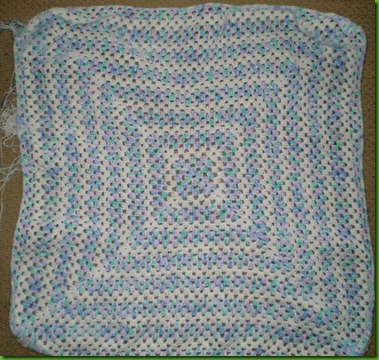 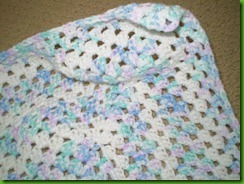 Then, I suddenly realised that the Charity of the Month (CotM) over at Knit4Charities was for NSW Women’s Refuges. My good intentions to finish my UFOs were waylaid by my good intentions to knit a few things for this charity. While watching Castle one evening, I became aware that slouch hats were in fashion with younger women and so I looked on Ravelry for some patterns. Here is 2yo Older Grandson modelling my first attempt on varying someone’s perfectly good pattern to suit myself! 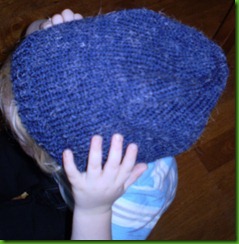 You can read my comments about my attempt on my Ravelry projects page. I haven’t taken photos of my other hats and I need to get them in the post so I doubt you’ll see any more of them.

I plan to write the second half of this post soon, but you have already seen where my good intentions lead!
Posted by Lynne at 11:00 am