a tale of good intentions (part 2)

Well, as I said in yesterday’s post, the past two months have been full of good intentions.

I intended to deal with most, if not all, of my UFO's but I got distracted.

I intended to make a number of things for the Charity of the Month (NSW Women’s Refuges) for March. I finished a beanie started by DD and two slouch hats (both modifications of original patterns on Ravelry). They didn’t work as well as I had hoped so I knitted one. from. the. pattern.

Yes, you read that correctly, I followed a pattern. I should have finished the hat in two days but I was away on a creative retreat at the end of March and, you guessed it, I got distracted. More of that in a later post.

The hat was finished last night. There is a deadline looming and a promise is a promise. This model has never appeared on my blog before. She is twelve years old but looks much older but it is the hat you came to see, not her. 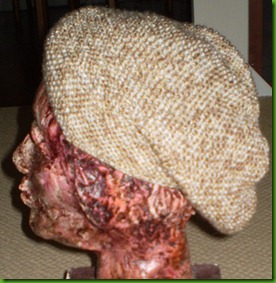 However, there have been other distractions from UFOs and charity knitting.

Back on the crafting front (here comes the quilting, Cindy):

Last weekend, Caring Hearts Community Quilt Group, of which I am a member, held their annual Airing of the Quilts. DD and I worked at the show as volunteers on Sunday. Apparently it had been much busier on Saturday but we had a steady flow of visitors for much of the time. I worked on our fabric sale stand and had to work hard with my maths. It’s amazing how fast we lose our skills when we don’t use them all the time! Unfortunately, I forgot to take my camera so have no photos of the day.

But the busy time was the lead up to “the Airing”. I had to baste, quilt (in the ditch around both sides of the turquoise sashing and about every four inches between the strips), sew in all the ends and learn how to do a binding with mitred corners; then there was ten hours of hand sewing the binding down. Now that I have learnt to do needle-turn appliqué, my hand stitching has become even finer and I found myself sewing the binding every eighth of an inch (or less)! Because I didn't take my camera, I have no photos of the finished quilt but you may remember the finished top (48” x 64”): 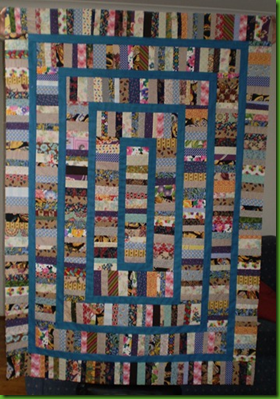 DD and I also finished the quilt we had on the quilting frame but, once again, I forgot to take photos and we no longer have the quilt. It turned out very well considering the troubles we had.

The other very pleasurable distraction has been my renewed interest in embroidery. I started monthly embroidery classes with my current sewing teacher on 14th March. My second class was last Wednesday (11th April). I have been enjoying it so much that I took it to “Sit and Sew” class on Monday this week instead of the project I should have been doing.

Here is my progress so far: 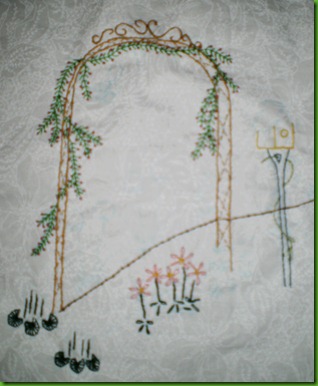 My teacher is off on a tour to Canada and America next week, including a trip to Paducah, so there will be no embroidery class next month. I hope to have this project finished and sewed into a cover for either my fan heater or my cutting mat before Kerry returns.  I’ll try to remember to bring you progress reports as I continue to enjoy the process.

Now, I'm off to make some pink scrappy blocks; care to join me?
Posted by Lynne at 10:19 am