A long time ago, when I was a "winter" knitter, I decided I had to find a different craft for summer because it was too hot to knit!


I had tried embroidery which I showed you in this post. I enjoyed it and thought I might do some more of it.

We were going away for a few days because our cork floor tiles were being recoated and the smell of polyurethane is unbearable. We had some long-forgotten reason to visit a local store and, though I looked all over their small craft department, I couldn't find an embroidery kit. However, I did find a small cross stitch kit. Ideal! Everything I needed (except scissors and a hoop) was in the package. It was small so I could work on it in the car and it was inexpensive so if I didn't like it, it was no big deal!

I finished that first cross stitch, framed it with the embroidery hoop I had used to stitch it and gave it to my mum for Mothers' Day. It's still on display in her china cabinet. 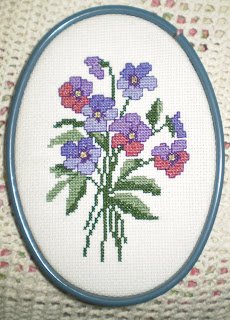 But I was hooked! I started making people cross-stitch bookmarks. I bought "waste canvas" and began embroidering on tee-shirts and socks. I bought a couple of kits and worked those. I think people even began to expect that they would receive small cross-stitch embroidery from me for presents.

But then came Big Project #1. DD and I still smile at how I finished it and was washing it in the bath while she stood lookout for Daddy coming home from work. It was his Christmas present and I needed to block it! He loved it. 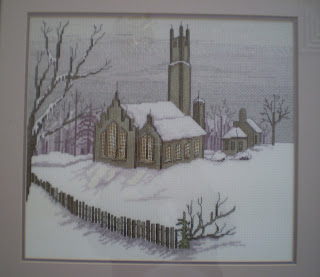 Then my sister got engaged and I began a cross stitch of blue and white crockery on a dresser as a wedding gift. I have no photo of that one to show you but I know it still hangs in my sister's dining room (even though that marriage is long over).

DD was given a cross-stitch for Christmas one year but she outgrew it and we had to take it from her room and hang it in the hall. She says she still loves it (or maybe she has renewed her love for it) so maybe, one day, she'll hang it at her place.

Mum's 60th birthday came next and what better thing to give a "new Australian " (she had become a citizen just six years before after living here for thirty one years) - Australian wild flowers! 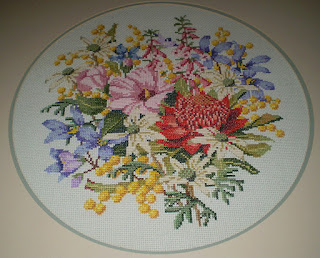 I took this photo over the mantlepiece, way above my head so please forgive the funny angle. The photo below shows some detail (if anyone is interested it is 14 count Aida cloth); the big red flower is called a waratah. 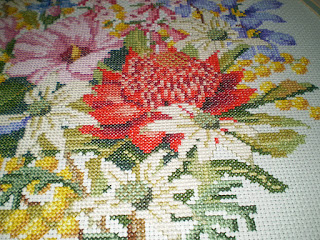 It is the floral emblem of my state and grows only in sandy soil. We have clay soil so, unfortunately, have not been successful in growing one (WM dislikes pots). You can read more about waratahs here.

Then mum and dad gave me a pattern for a piano done in cross stitch (yes I do play - badly). I never finished it, I think all that cream (on the left) was just too much for me! It has become one of my many UFOs about the place! 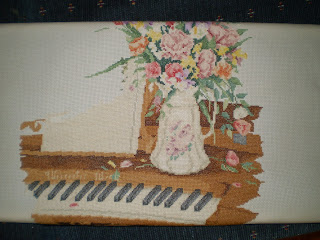 What about you, did you once have an obsession with another craft?
Posted by Lynne at 11:22 am