one thing at a time

It has been a long time since I worked on one craft project at a time as my normal modus operandi.

Way back, when I was a child, my mother bought the materials she needed for a project and worked on that project until it was done.

Understandably, that was the way I was with my knitting!

Like mum, I would knit in winter and when the weather started to warn up, finish the project in hand and that was it - until next winter.

Until someone gave me an embroidery kit. I can't remember who or for what reason; but I clearly remember that, although I had never shown the slightest interest in embroidery, I decided to open that kit and give it a go as a summer project.

I didn't know what I was doing and I didn't know about embroidery hoops - I just did what I always do, read a bit (in this case the instructions in the kit) then got started.

It didn't turn out so bad, if I do say so myself. 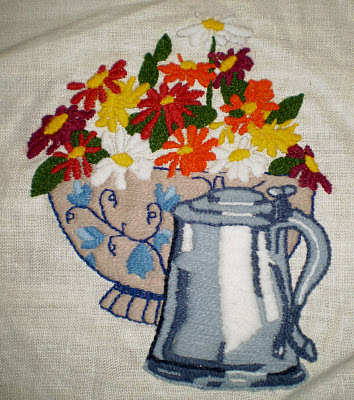 A couple of summers later, we were going away for a week and I wanted a small project to do in the car. Knitting was out because people don't knit in summer, do they?

I bought a cross stitch kit of some violets. Quick and simple, I was hooked! (Oops no, that would be the small "rug" I made from a kit when I was a teenager - I still have the latch hook; I told you I am a hoarder).

Anyway, that kit led to another, then to bookmarks for gifts and finally to the purchase of large patterns. But, I digress... I think I'll save those for another post!

So, in winter I worked on one knitting project (usually it took all winter to knit one jumper anyway) and in summer I worked on my cross-stitch.

Then, in the early years of this decade, I got involved, briefly, in scrapbooking. It didn't take me long to realise that working on, and buying supplies for, one project at a time was very limiting and I began to collect papers, card stock and embellishments. I didn't know the word "stash" back then - but I still have a stash of scrapbooking supplies (you're not surprised, are you?).

In 2004, I was tired of working from other people's patterns in knitting and cross-stitch, some something deep inside me was trying to get out. I was inspired by the knitted works of Kaffe Fassett, so I decided to design and knit my own jumper (sweater). I started collecting yarn; to quote Kaffe: "if in doubt, add more colour". It took me two winters to finish; it used 63 different yarns and weighs a ton!

Inadvertently, I had started a stash - I had left overs of all 63 balls plus the ones I had decided not to use. I immediately went on to plan my next fassettesque project (which has never been started) and began collecting yet more balls of yarn. At that time, I used only natural fibres - wool, mohair and a little alpaca.

In 2007, I was introduced to the world of knitting blogs and, of course, I just had to have one. But my blogging was infrequent and I mostly only wrote about knitting.

By then, I was a member of knit4charities so buying discounted yarn (usually acrylic) seemed sensible given that I was knitting much more - even into summer!

And so, dear readers, just like every other knitting blogger I know, I almost always have several projects on the needles.

Last year I stumbled into quilting. DD and I bought too much fabric for our first quilt so we made two quilts from the same fabrics. We made the first quilt top and then cut out the pieces for the second! We had already succumbed to polygamous quilting and had only been involved in this fantastic new world for less than a month!

I'm pretty sure everyone who read and comments here works on multiple projects at once, but were you ever a one-project-at-a-time crafter? When, and why, did things change?
Posted by Lynne at 11:13 am