a funny way to quilt

DD and the Grandsons usually visit on Friday, stay overnight and go home on Saturday evening after dinner. We make our plans based on this schedule, but we have to fit them in around the wants and needs of a nearly-two-year-old and a demanding six month old.

This weekend we planned to get our first quilt on the frame.

MIL came for lunch on Friday and wanted to see how the quilting frame worked. We gave her a demonstration on the sample calico (muslin) we still had on the frame. Just as well I hadn't decided to take it off the previous day.

After MIL left, I ironed the backing for our Disappearing Nine Patch quilt. I took it to the garage to put on the frame - and Older grandson grabbed hold of it and wouldn't let go! He just loves all our quilting fabrics, and this one was big enough to play "boo"! Of course, I had to iron the backing all over again!

This time, I realised that the bottom of the backing wasn't quite square because I had not squared off the end of the fabric that had been cut (with scissors) in the store. I needed to wait until OG went to sleep (or Grandad took him somewhere to play) so that I could lay it out on the floor and trim it. Friday afternoon was very hot and muggy and we abandoned any attempts to get into the uninsulated garage and attach the quilt to the frame.

Instead, DD and I went into my sewing room. Not to sew - oh no! WM had shampooed the carpets on Tuesday and the boxes of stuff that had been hiding in the corner in front of the wardrobe (closet) were now stacked on my cutting table. 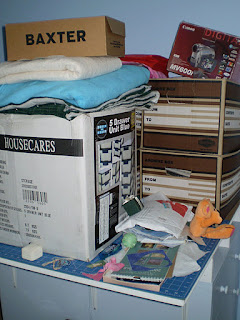 This meant that we had clear access to the wardrobe for the first time in months so DD began to look through her stuff (it used to be DD's bedroom). She threw away piles of stuff (mostly paper from courses she has taken in the past), filled a small box with stuff for the op shop (thrift store) and managed to move all of her stuff into less than half of the space. This operation took most of Friday afternoon and Saturday morning but hey, I now have some space to store things I want in here! 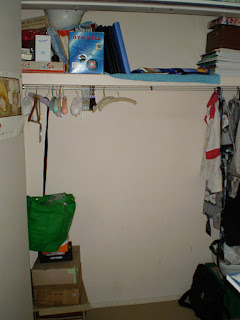 And with design wall rolled up, we can admire the front of the wardrobe doors (WM and I assisted an artist friend to paint these as a surprise when DD was a young teenager!) 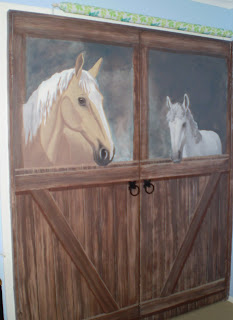 After lunch yesterday (Saturday), WM went to our neighbour's house because OG wanted to play with their little boy and WM always supervises our grandson. DD and I took advantage and finally tried to load our first quilt onto that frame. And guess what?

It was too big for our small set up. We had to wait until WM and OG came home. I entertained OG inside the house, while DD attempted to assist her dad and look after her nearly-crawling-and-therefore-grizzly six month old!

To make a long story short, WM finally finished extending the frame just before dinner but the screws that hold the middle section together are too long and the cart that holds the machine can't pass over them smoothly so we still can't use the frame!

At least I can get my cutting table cleared off and get onto some sewing!
Posted by Lynne at 11:03 am