Yesterday was very hot and humid. DD brought the Brother 1500S machine in from the garage where it has been in use on the quilting frame. We have had some issues with it - notably the top thread keeps breaking. (Any hints?)

While I quilted the change mat I made the day before, DD cleared the kitchen workbench (well lit by a skylight) and opened up Big Brother. Using a standard machine cleaning brush, she took a fair amount of lint and loose small threads from the area under the feed dogs. Then I gave her a pipe cleaner and a straw (something I'd seen on a blog somewhere some months ago) and she was able to reach further back into the machine.

﻿﻿WM then put machine oil in the six insertion points and I put the machine back together. (Isn't team work great?) I carefully threaded the machine with the manual open beside me and set the tension dial halfway. My first attempt on a piece of scrap fabric showed that the bobbin thread was couched, not sewn as it should be. So I changed the tension and before long I had a perfect row of stitches

I grabbed a sample quiting sandwich that I have used in the past to practice free motion quilting, it sewed beautifully. I then lowered the feed dogs, changed to the darning (quilting) foot and attempted some FMQ. It wasn't great but the machine performed as it should.

We have not yet had a chance to try it out on the quilting frame (it was too hot in the uninsulated garage) but hope that the clean and oil have done the trick.

Back in the sewing room I pieced the last five disappearing nine patch blocks from this top into a panel. I then measured and cut some fabric for the rest of the backing. It would seem that inserted panels are my "look of the moment"! They are certainly a classy way of getting around the fact that quilting fabric is not always wide enough in itself to be used as backing!
﻿
﻿

The photo below shows some of the detail of panel. 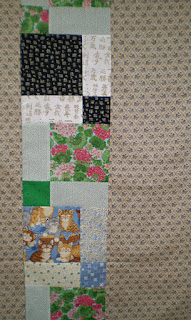 The fabric used for the backing was a donated fabric - two metres from "The American Woman's Home Collection" (pattern #23998). It was very soft and may be too thin for a backing fabric but it was all I had that was big enough. 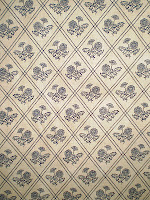 So, we have two tops and backings ready to be quilted when the chance arises. It will be exciting to quilt a real project instead of practising on calico!

ETA I am linking up with Fun Thread's Sew What Monday