Some months ago I mentioned (in this post) that I had been given a pile of disappearing nine patch blocks and asked to "do something with them".

The history of these blocks is that someone gave them to my sewing teacher who gave them to Margaret (the founder of Caring Hearts Community Quilting Group) who gave them to me when I joined the group.
I didn't know what to do with them so they languished in my sewing room, being shifted from one place to another (they were always in the way),  including a short stint on the design wall, before finally being put away "somewhere safe" (you know that place, don't you? LOL).
Last week when I wanted them I couldn't find them. When I came home and started looking again, they were staring me right in the face. I took them out of that "safe place" and put them in another - and promptly forgot again where that was!

Anyway, to cut a long story short, when I found them late last night I put them in my sewing bag and today they went up on the design wall in the classroom.

A couple of hours later, I had this: 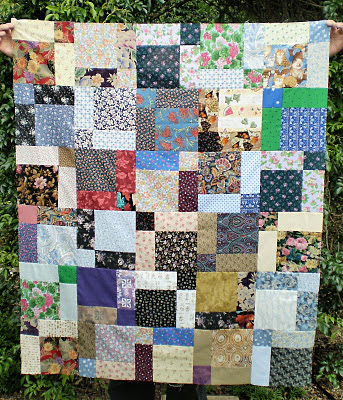 The reason I didn't know what to do with them was there is such a mixture of fabrics: florals (both large and small), novelties, geometrics, paisleys, and text. Here is a sample in what is now the top right of the quilt. 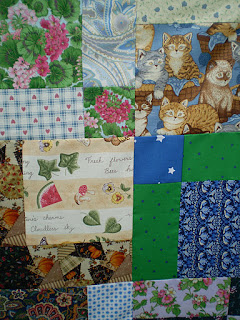 Now to measure it and make a back including the five left over blocks.

I think DD and I might quilt this one first - it has less seams than the other so less places to break a needle!