What will I do with these?

Last Thursday, at the monthly meeting of Caring Hearts Community Quilting group, I was given 27 x 9 inch random disappearing nine-patch blocks and asked to "do something with them".

The fabrics are truly random: there are florals, paisleys, solids, novelty prints, Japanese writing and plaids (to name a few). Despite what my photo shows you, there is no colour consistency between the blocks either! 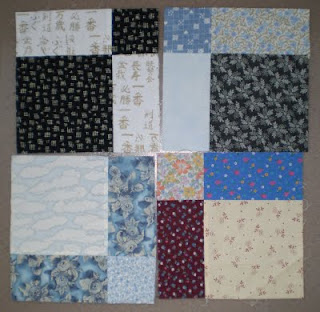 I do not seem to have the four pieces that made the original nine patch.

Right now, I am considering separating the blocks into those that contain black in the background fabric, and those that do not. I was going to sort them into colour groups but some of the blocks were too random even for that!

Since there are twenty-seven blocks, I guess I will have to make a few more (to make thirty perhaps?)

I have looked around the 'Net for some inspiration and found these:


Sarah Loves Fabric (scroll down)
Gypsy Hill (scroll down to the EQ layout)
Grandma Barbara (no tutorial so I'd have to wing it using another tutorial!)
Any other suggestions?
Posted by Lynne at 10:08 am