On Tuesday night I prepared to sit in front of the television for a couple of hours and knit.


The weather was warm so the two blankets I have on the needles did not appeal.
I have three pairs of socks on the needles but one is being held up by another (I need to buy more 2.25mm dpns). The one doing the "holding up" needed me to concentrate -- which is hard to do while watching television. The third pair is "on hold" while I consider my alternatives.
There was nothing for it but to cast on something new.
But not just a new project. Something never before attempted (by me).
I have a large quantity of sock yarn so I thought something for a baby/infant might be a good idea. Then I remember the Mexicali Baby Ole pattern (Ravelry link) from "Babies and Toddlers". I have admired the pattern since I bought the book in 2009.
I thought it would be a practical marriage of sock yarn and baby sweater.
The first yarn I tried was supposed to be "fake isle". Unfortunately, it turned out to be one of those yarns that has very short colour bursts - maybe only ten stitches or so. It may work in the round on 64 stitches but knitted back and forth it was. just. awful!
I ripped it out (I was watching TV remember?) without a second thought.
During the commercial break, I changed to a self striping yarn, working on 3.50mm (US 4) needles.
I knitted a sleeve and cast on for the body (it is knitted from cuff to cuff).
In the morning, the first thing I thought of was "rip out the knitting". And so, three hours of knitting looked like this in just a few minutes! 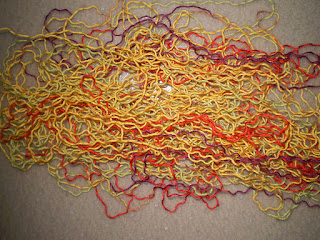 My brain must have been thinking about my knitting while I slept. 3.50mm needles with sock yarn and knitter with a loose tension -- what was I thinking? I needed a needle between 2mm (US 0) and 3mm (US 2+) for a satisfactory result.
On Wednesday morning, immediately after ripping out my knitting, I found a 2.75mm (US 2) circular needle and cast on again. After four hours of knitting (interrupted by the arrival of DD and two grandsons), I had this: one sleeve and the beginning of the body. 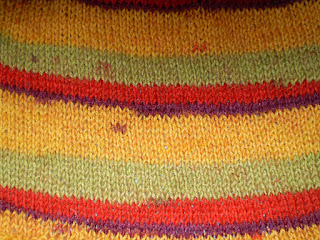 A lovely bright jumper for a little one!
Posted by Lynne at 11:07 am