November is scrappy and brown

There is an old saying that runs: "Better late than never!"

At the beginning of 2011 I had a blog but wasn't blogging.

I discovered quilting blogs soon after my return to the blogisphere in March. Along the way, I found Kate's Arty Bits Blog. Kate had been participating in the Rainbow Scrap Challenge since the beginning of the year. Curious, I followed the links and found SoScrappy. Angela encouraged quilters to use up their scraps by setting a different colour challenge each month.

But I was still a new quilter back in March. I had no scraps to speak of.

In August, I joined the Caring Hearts Community Quilting Group. At my first meeting, I was given a shopping bag full of scraps "to do something with".

Also in August, we began to make string blocks for Oz Comfort Quilts. I began to organise my scraps as follows:
- strings of three different lengths -- less than 6" inches, between 6" and 15", and more than 15"
- crumbs
- triangles
- larger pieces (less than fat eighths)
These are not separated by colour, only size and shape. Because I still have comparatively few scraps, these categories suit me at the moment.

In October, I participated in the Rainbow Scrap Challenge by making one scrappy appliqued heart (seen here). I was going to put an orange frame around the white background - but I had no orange scraps that I thought would work!

This week, I determined that I was going to participate in the challenge more fully so I went through that shopping bag and all my scrap containers. This is what I came up with (most of it came from the shopping bag): 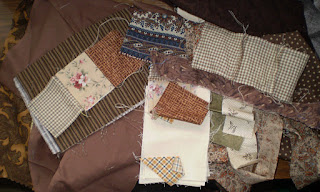 And this is what I made (while I was practising accurate piecing): 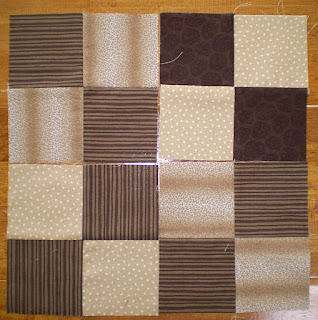 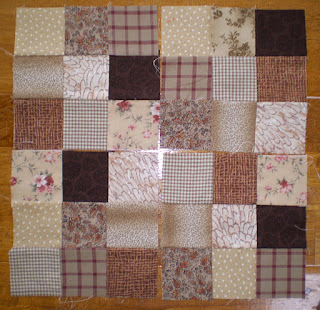 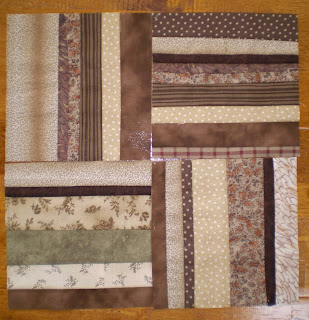 Yes, that is a green in there; it looked brownish next to my other greens so it slipped in!
improv blocks (6 1/2 inch unfinished) 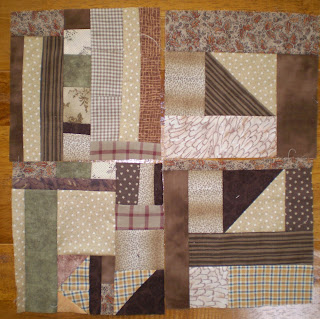 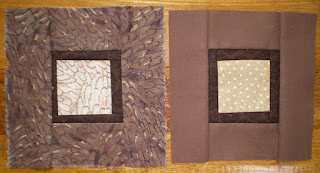 The dark brown fabric around the centre of both blocks was cut into bias 1" strips when I got it so I found it impossible to keep it straight! Hence the title "Wonky Windows".

Nineteen blocks in all.

As I said, better late than never (And I haven't even cut my brown hearts yet!)

Do you have any brown in your stash/scraps?
Posted by Lynne at 11:04 am