DD and I spent some lovely time together over the last few days.

On Thursday, when I returned home from the Caring Hearts Community Quilting Group (CHCQG), she was already here.

We didn't get much time for sewing for the rest of the day - instead we spent the time looking through the fabrics that I had brought home with me. In the evening, DD knitted and I continued to sew the binding onto the quilt I had been asked to complete.

I began the binding at CHCQG. I had taken my embroidery scissors, a couple of needles, a needle threader and binding clips to the group with me, but had to borrow thread as I wasn't told to bring my own. The thread I borrowed was ecru, the binding I was sewing was blue. My hand-stitching is not too bad but that light coloured thread stood out against the blue like a "sore thumb".

So, when I got home, I found some blue thread and finished stitching down the binding with that. Then I re-sewed all the stitches I had already done and removed the ecru stitching. I finished it on Friday afternoon while teaching DD how to make QAYG string blocks.

Here is the quilt - please remember this is not my work; all I did was stitch down the binding.

This quilt reminds me very much of the warm/cool quilt-along which has been very popular in quilt-blogland recently. We'd better take a look at the back that shows that yes, there is binding - it's the same colour as the front border. 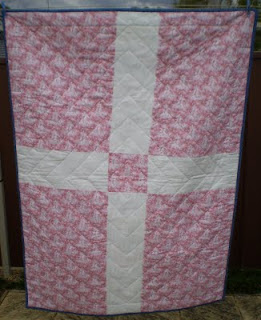 On Friday, DD and I went to the Mad Quilters Gathering. I went looking for specific fabrics that I wanted but didn't see any! All I ended up buying was a quilter's tool for making half square triangles and some spare blades for my rotary cutter.

DD and I both spent some time at the Gathering sewing a block for charity. For DD's block, she had to sew two borders around an appliqued patch. My choice was a four patch which was a little bit of a challenge because each of the four patches was made of three strips of fabric and I knew they had to be reasonably accurate so that the points would meet properly. I was so please to get a perfect intersection between the four patches. Unfortunately, I had not taken my camera and I didn't think about DD having one on her phone so there are no photos of our work!

When we came home, DD (who hasn't sewn for several weeks) was well and truly bitten by the sewing bug; especially since she had been sewing on a Husqvarna Sapphire machine. She was very excited when I taught her how to make a QAYG string block and she was allowed to use my new sewing machine, even though hers was right there in the same room. Her first attempt is on the left - perfect, as I said before, but a little bit "safe" (as was mine). She became much more adventurous in her second and third blocks.

You've already seen my first block on this post; it looks very boring in comparison to the five I have made since.

They are very easy and work together well. I just have to remember to check the back of QAYG block every time I sew a seam - sometimes I don't keep the back as flat as I should!

As many blocks as I can fit in a 500g post pack will be sent to Oz Comfort Quilts; the rest (if any) will be added to and made into a quilt for CHCQG.

We also spent some of Sunday afternoon cutting more foundation pieces (11" square) and further sorting our strings into three different containers: over 15", under 6", and those in between. Of course, the more blocks we make, the more crumbs we make - they have their own containers too: one for "triangles" (or pieces roughly shaped like triangles) and the other for more rectangular pieces.

All in all, a very productive, and highly enjoyable, few days.
Posted by Lynne at 10:07 am