sometimes I need something new

Firstly, thanks to everyone who has read my 500th post and cast their vote; if you haven't voted yet, would you please pop over there and do so - it's all for a good cause (or three). Voting will remain open until 8am (Sydney time) Saturday 6th August. Thanks heaps.

I have been working on my Country Houses Quilt for nearly three months. I have only two more seams to machine sew (which I will do today) then there's a fair bit of hand-sewing before the next bit of machine work. I will take photos of the process and show you in a future post.

Yesterday I couldn't shake off that tired, weary feeling. I didn't want to do any of my usual pursuits - no knitting, no sewing, no reading, no watching television.

Instead, I hand-washed and line-dried my ten half metres of fabric and then ironed them all. 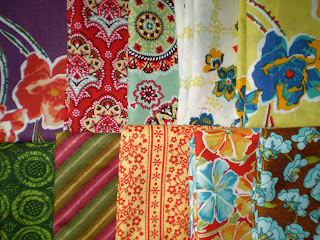 I spent time sorting stuff in my studio -stuff that had just been dumped to be dealt with "later". I threw away paper work, both recent and ancient.

I changed the way I store my fabric - that is, it's all still in the same semi-transparent plastic drawers but I moved it around so that the scraps are more easily accessible!

I sorted my fabric scraps into strips, triangles, crumbs and larger pieces. Here is my box of strips - who'd have thought there'd be so much from just three quilts? 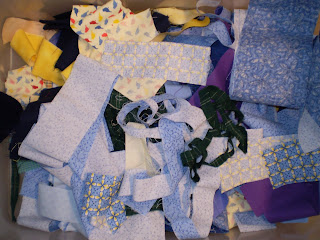 I rediscovered the scraps that Kate sent me a couple of months ago when she was sorting through her scraps. 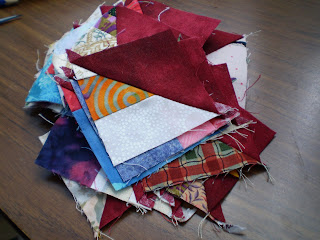 After dinner, while WM was out for a couple of hours, I took to my cutting board and then to my sewing machine. And I made this from some of the scraps from the first three quilts:

It took longer than I had anticipated (doesn't everything?) but I have to say it is my favourite thing of any quilting I've ever done. It just looks so neat! It reminds me of foam-core board but so much prettier!

And, of course, my sewing muse returned so I continued sewing until 12:30am! It doesn't look like much but this is what happened to some of Kate's scraps: 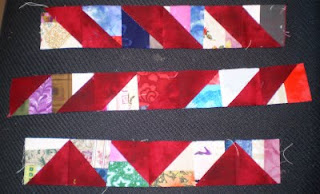 These will be used as strips in the string blocks.


I'm off to cut some more strings and sew more triangles into strips!
Posted by Lynne at 12:47 pm