additions to the fabric stash

There are two Big Box Craft Stores in my town. One of them I rarely visit - the customer service is non-existent and the one time I looked for quilting fabric the choice was very limited! They used to have a wide range of Australian-made knitting yarns but over the past few years they have introduced their own range - all made overseas!

On Monday and Tuesday of this week, the other Big Box Store had a "30% off all floor stock" sale. How could I resist? LOL

And, because many people I know speak in derogatory terms of this Big Box Store, I have to say this: the last three times I have bought something in the store, the staff have been friendly and very helpful; yes, that's right fellow Aussies, I got customer service with a smile! And not just me - every person who approached the fabric counter was treated very well. On the other hand, I can rarely find anyone in the knitting/craft department. Usually they are at the "party" counter and don't know anything about knitting or craft. But the ladies at the fabric counter know what they're talking about and share their knowledge willingly!

So, on Monday, after class at my LQS (where I bought enough wool/polyester batting to make twenty four more string blocks), I visited the Big Box Store. One of the reasons for my visit was thread but I forgot to buy any! It took me ages to decide on a colour for the sashing for the Wonky String blocks. I think I auditioned every solid or near-solid on the shelves. Finally I settled on this one. I had to photograph it between two blocks to get something approaching the right colour. It is actually more purplish than shows here; I call it "royal blue", the fabric label calls it indigo". 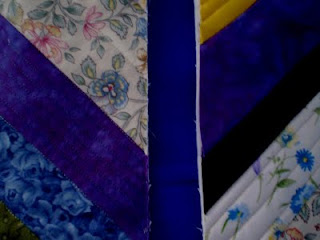 The Wonky Strings quilt is a collaborative effort between DD and I. She wasn't able to go to the store with me so I had to make the choice alone. If DD doesn't like it (which would be unlikely since blue is her favourite colour), I'll keep it for the Scrappy Strings quilt.

I also picked up half a metre of each of these five fabrics. They were already discounted to $6.00 a metre, but I got 30% off - what a bargain! 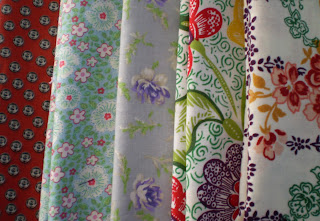 And finally, I bought three metres of this purple fabric for a quilt idea I want to try. More about that later! 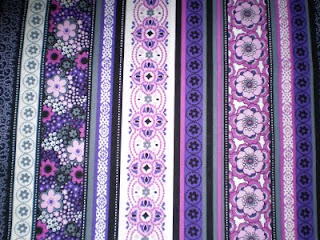 So, quilting has resumed at Never-Too-Hot-To-Stitch!

Speaking of which, do you like the new look (and the modified title)?
Posted by Lynne at 10:12 am