Before I explain my latest dilemma, I must tell Jessica (and any one else who's wondering) the answer - there are 63 different yarns used in the the intarsia jumper shown in yesterday's post!

Also, as far as the Pinwheel Blanket is concerned, WM was only able to get one of the two colours I need so I have to rethink the blanket design. I really don't like when someone sticks a bit of "nearly the same colour" yarn in and hopes no-one notices! I'd rather redesign the top and bottom edges than have it look 'tacky'!
~~~~~~~~~~~~~~~

So, dear readers, please indulge me: what would you do in this situation?

I have worked on my Modified Feather and Fan Baby Blanket for about eight hours and knitted about 33cm (13 inches).

I am not feeling the love. 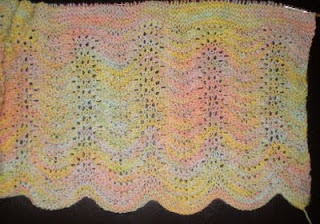 I don't like the way the colours pool in the variegated yarn. It's not that I am so naive as to think that the colours shouldn't pool, I just don't think the pooling works with the Feather and Fan pattern. I think they are competing.

Generally, I have fairly simple rules for knitting:

What do I think is a simple pattern? Well, obviously stocking (stockinette) stitch, but also garter stitch, moss (seed) stitch or even basket weave.

Stocking (stockinette) stitch isn't good for blankets, it rolls towards the 'right' side. Stocking stitch, moss (seed) stitch and basket weave all have 50% purl stitches, and that means slowing down the speed of my knitting - so I opted for a pattern which has only knit rows because I wanted a quick knit in this situation.

After knitting the Feather and Fan for about 30cm (12 inches), I decided to knit plain garter stitch for 30cm. I want to knit the other side of the blanket separately and graft the two pieces together.

Because Feather and Fan has convex (curving outwards) scallops on the cast on edge and concave (curving inwards) scallops on the cast off edge. As "out there" as I sometimes am in my colour choices, I find asymmetry hard to live with so I want both edges to have convex (outward curving) scallops. This necessitates casting on twice and grafting the two pieces. Because both pieces would curve in opposite directions - the nature of the pattern - when trying to join them, I have decided to put plain garter stitch between them.

So, having made that decision, I found that the plain garter stitch not only looks better in my opinion (not that I have knitted enough to know how the colours will pool) but is also softer than the part of the blanket knitted in Feather and Fan.

Last night before I went to bed, I decided to rip it all off the needles. But I was too tired to do it there and then so left it on the lounge (couch/sofa). This morning, before I got up, I had decided that I would rip it out if the blanket was too wide; that is, greater than 100cm (40 inches)

After taking the photo, and without measuring the width, I have decided to leave it as it is! I can live with it - and some people at Knitters' Guild yesterday thought it was pretty (even if I'm not entirely convinced).
Posted by Lynne at 12:36 pm