a note to the Cruise Director

One of the followers of this blog has self-styled herself as the "Cruise Director" (hi, C!)

In the interests of keeping the ship afloat (so to speak), I bring my latest report on the progress of the Pinwheel Blanket.

So far I have joined 80 of those units into 20 blocks.

I then joined those 20 blocks into 10 pairs of blocks. 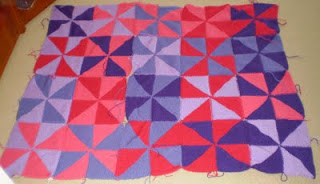 Before I ran out of yarn, this was the pile of units I had knitted. 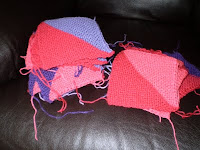 Because there is a mistake in the joining of two blocks in the photo above, and because I would have to rip out 200cm (80 inches) of grafting to fix the mistake, I have decided to let sleeping dogs lie. (Are sleeping dogs allowed to lie around on this ship, Cruise Director?)

The good news is that having made that mistake, I can now make a deliberate mistake and fudge one more block for the yarn I couldn't get!

So now I have to do the following to be finished by next Sunday:
Do you think I can do it?