don't look around - you'll be overwhelmed

Well, you may not be - but I'm beginning to feel like I'm drowning in UFOs - again!

But, when I'm learning a new craft, I get very excited. I want it all - right now!

On 4th June I went to a quilting workshop intent on learning as many ways to make half square triangles (HST) as possible. I got really excited about HSTs - for a few days!

Then I saw a blog with a disappearing four patch block. I really wanted to give that a go. I waited. I forced myself to focus on HST. But eventually I caved and I made one!

Yes, that's it! Just one 8 inch block. And I was ready for the next thing!!

A friend suggested I'd better make sampler quilts rather than confine myself to the same block over and over - and I think she's right!

I don't have a short attention span. I can focus on the same knitting project for weeks on end. But I have been knitting for forty plus years and I've tried most of it! I won't say I've done it all but, well, I've done a lot. There is rarely anything that excites me to think, "I must try it right now"!

Patchwork/Applique/Piecing/Quilting has a different excitement. It's new. It's untried. It's unknown. And I want to do it all. Now. If not sooner.

I can be very disciplined. Yesterday I got a new toy. I unpacked it and took photos to show you. WM and I cut a single shape with it and then I put it away - for later! 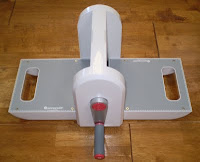 When I have finished some of these UFOs (in order of how long they've been hanging around):

﻿I don't know what I'm doing with this. It started life as a scarf but I felt the fabric was too dense for a scarf. Then I thought it would be a bib for forthcoming Grandbubby the First (who's now seventeen months old). It's acrylic and non-absorbent - no good for a bib. I'm thinking I might use the ends for a scarf and knit garter stitch between but I'm not entirely convinced. Any suggestions? (Rip it?)﻿ 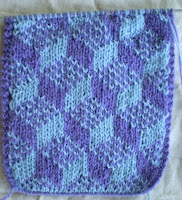 After attending a knitting workshop with Liz Gemmell last month, ﻿I have found a way to deal with all the ends of this blanket so it will get finished - one day; right now it's not a priority! 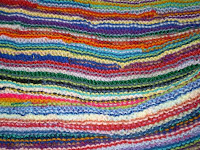 Second Sock/Mitten Syndrome is alive and well.
This sock was finished but the cast (bind) off was too tight and I put it in the naughty corner in late April - it's still there!

I would block this shawlette - if I could figure out how! It's not flat; the centre is flat and then it ruffles! Hard to explain, even harder to photograph!

Eight out of fifteen of these blocks were completely quilted until I got sick last week and couldn't focus to sew straight!


I ran out of red yarn (136 stitches from the end of the last block). WM went to the Big Box Store but it seems they are not carrying that colourway anymore! I have to redesign my blanket to work with the colours I have.

This fabric was bought to make two change mats for Older Grandson and drawstring bags for Angels for the Forgotten - once again, I was too sick last week to sew straight!

This blanket is the thing getting my attention at the moment - the weather has been cold and I have had a cold; these two things combined mean my favourite activity has been knitting, curled up under a rug, in front of the television. This is coming together very quickly - despite me not feeling the love for the combination of yarn and stitch pattern!