On Saturday we attended our last workshop for a while at Aussie Patches. We really like the teacher, Elizabeth, but the next workshop is 2nd July and DD's baby is due on 8th July. Since attending the workshop means she would be away from her baby for nine hours I think it will be a while before she attends any more workshops. I don't want to make the three hour round trip alone; it's not that I don't like driving, it's just that at the end of a six hour workshop I'm very tired and I have to drive home facing the setting sun - a dangerous task at the best of times. The drive is made easier having DD in the car; chatting always makes the time go faster.

For Saturday's workshop, I decided not to work on my applique Colonial House quilt; that is the project I am working on with my other teacher at Down Patchwork Lane. I learnt many years ago, as an art student, that one cannot serve two masters - both will have different ways of doing things and it's better to keep the projects for each of them separate.

I emailed Elizabeth and asked what I needed to bring to learn how to make half square triangles. She answered with a list of various sized squares and strips.

At the workshop I learnt five different ways to make half square triangles. Of course, some of them are just variations on other ways but hey, it's good to know various ways to do things.
﻿﻿
The first method is the conventional way: make a square and cut it in half through the diagonal. A lot of people don't like this method because it means sewing on the bias and pieces can be stretched out of shape easily. However, even the novice in me can see that there could be times when a triangle needs to stand alone, not be half of a square - for example, at the corners of a quilt where all the blocks are set on point.﻿﻿The second method was to press two squares right sides together then draw a line through the diagonal on the lighter coloured square. Then, as you experienced quilters would know, sew 1/4 inch on both sides of the the line then cut along the line. The biggest difficulty for me was getting the diagonal line on the diagonal - fabric moves and stretches while being drawn on and it isn't as easy as it sounds!

The third method was a variation of the second, but involved a little tool that aids in drawing accurate diagonals and stitching lines! 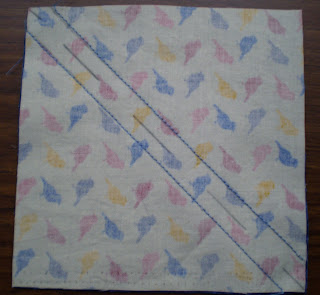 I was going to buy one of these at the end of the workshop but I forgot. Fortunately, the Craft and Quilt Fair is only three weeks away so I can get one then!


The fourth method is good for making identical squares from triangles. Firstly, I cut a fifteen inch square then gridded that off to twenty five three inch squares. Obviously different sized squares can be used.

The grid is then marked by putting a diagonal across each smaller square then sewing on either side of the diagonals (as in method 2) but en masse.

﻿ After stitching, cut the grid into strips then cut each strip along the diagonals to create squares made of two triangles!

﻿﻿ The fifth method makes multiple numbers of identical squares too. Cut two strips of fabric (mine were 3 3/4 inches), press them right sides together and sew a 1/4 inch seam down both sides. Using a six inch square ruler on point, put the left and right points on the bottom seal line and the top point on the top seam line. Cut out the triangle. Slide the ruler over so that the left point of the ruler is on the seam line where the last triangle was cut and the right point is on the seam line. Cut out that triangle (thereby making two triangles). The disadvantage of this method is that both the sides of the triangle that has just been cut are on the bias so both can stretch out of shape. 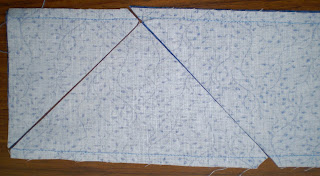 Come back tomorrow to see what I did with some of these triangles!
Posted by Lynne at 8:11 am