After spending several months in hibernation, my crocheted blanket (afghan) for Wrap With Love is finally finished.

My skills at crochet are very basic. My grandmother taught me to wield a hook when I was a teenager but I didn't use those skills for nearly thirty years. Now, I occasionally crochet just to use different muscles from knitting.

Since I don't really like sewing squares together (my mattress stitch never looks tidy), I decided to crochet a blanket in "one piece". First I crocheted two 30" squares then crocheted them together. Then I crocheted a five inch border all around. 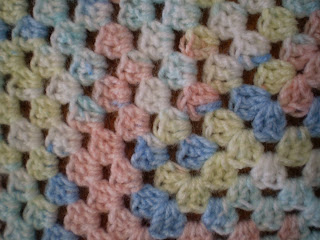 Sounds simple, doesn't it? But things didn't work out as I had planned. Firstly, my squares were not square! I didn't realise that until much later. Secondly, the tension (gauge) in the two squares was slightly different so even though I had done the same number of rounds for both squares, they were not exactly the same size! Nevertheless, I persisted.

I began crocheting the border. After several rounds, with more than 750 stitches in each, I lay my blanket out to be measured. It would not lie flat! I pulled and I tugged but, being 100% acrylic, it had no give. I set it aside.

I wanted to rip it all out and start again but WM said that human bodies are not flat so what did it matter? Finally I took it to someone I know who does beautiful (and fast) crochet work. She told me my tension (gauge) was too tight and suggested I try using a larger hook for my work. I still wanted to rip it out but my "expert" told me there was no need. I listened carefully and, several months later, finally got around to buying a larger hook.

But, those of you who do fibre/textile crafts would know, when you add a larger piece to a smaller piece, you either have to gather it or you get a ruffle! So, now my non-flat blanket has a wavy (not quite ruffled) edge.

And you know what? I'm going to leave it like that! I didn't make it for accolades. I'm not going to enter it in a competition or exhibition. There are too many needy people out there for me to worry that my blanket isn’t perfectly rectangular or doesn't lie flat. At 9.3 kg (just over twenty pounds), it's thick and heavy and will keep a non-flat body warm this winter.