It's been a long time between sessions but DD and I had a play-date on Wednesday.

First there was the setting up of equipment.

Then a dive into an enormous box to see what we had been up to when we last sewed (June 2010).

There was quite a bit of stitching

And a fair bit of stitch-ripping

Which resulted in six of these (all done by DD, though not all were done on Wednesday) - look at those beautiful points: 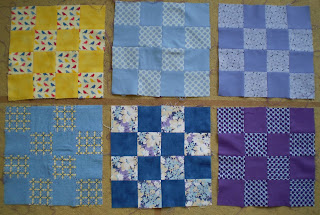 And two of these (DD's on the left, mine on the right - it's really not as wonky as that photo makes it look): 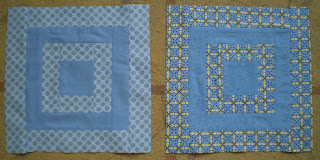 Not much to show for several hours work. One of those last two blocks, which contain 13 pieces - some of them small and fiddly, took me an hour to sew and press and sew and press and measure and sew... well, you get the idea.

Because I know you want to know, C; the blocks are 8 1/2 inches at this point in time.