In my post on 1st March I said I would come back with photos of finished objects. I also said on Wednesday that there were items in my knitting corner that were awaiting photography! DD visited on Wednesday so photos were taken and I have some goodies to show you.
Firstly, a hat knitted by DD - her first foray into slip stitch patterns; we are both very proud of her results. 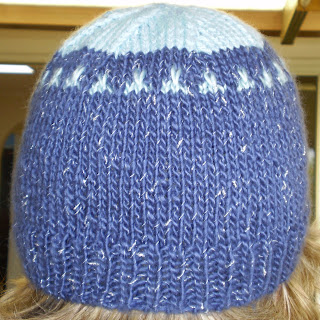 As for me (specs on my Ravelry project pages if you want them; listed here in italics): 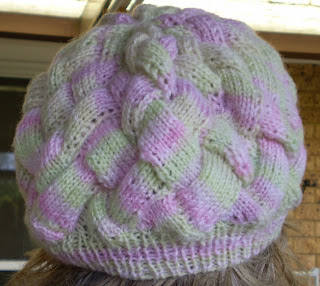 I said the striping of the yarn looked like lime and pink coconut ice; DD said Lime Spider (or icecream soda) and Coconut Ice, hence the name.

This is an attempt at conventional entrelac - I'm not in a hurry to try this style of knitting again, it's slow and seems to use more yarn than a conventional beanie would. The hat designed by Abby Franquemont looks great, mine less so. Not quite sure why - perhaps the fact that it's knitted in a hand-dyed acrylic and therefore can't be blocked is part of the answer.

Why did I choose to knit this in my handpainted acrylic? I wanted to see what the shortish colour repeats would do in shorter rows of stocking (stockinette) stitch.

I also tried to modify the pattern because it was getting too big - my modifications were not as successful as I would have liked! 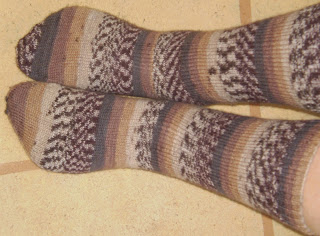 My first attempt, following the pattern exactly, gave big, baggy socks that were enormous on WM! I ripped the 3/4 finished sock out completely and started again.

I have never done this kind of heel before and was reasonably happy with it, except for the hole where the short rows of the heel joined the foot. If I knitted it again I would slip the first stitch of every row while knitting the heel gussett - it is so much easier to pick up stitches along the gussett if I do that!

These took so long - Second Sock Syndrome plus no record of modifications on the first sock = pain in the knitting needles! I am determined that in future I will knit two socks at the same time; I have enough dpns to do that! 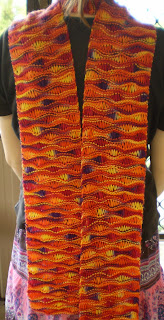 DD and I dyed 400m (200g) of yarn in this beautiful colourway. While I was winding it into a ball, I started singing "Sunshine Lollipops" so that became the name of the yarn!

I just love, love, love this pattern - so quick to knit, so bright and cheerful (well, in the yarn I chose and in the yarn on the Ravelry pattern page). How many other patterns give you an eight feet scarf (2.4 metres) in just three days?

I knitted this one in wool. I knitted till it was 1.8 metres long. I usually knit in acrylic and forgot the magic of blocking - voila! eight feet of scarf! I will definitely be knitting this pattern again! 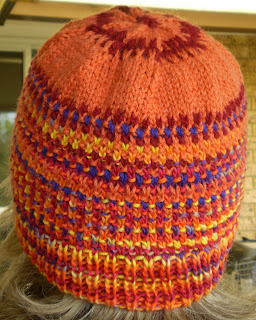 If I had not been using a slip stitch pattern, I may have had enough to knit a child size hat but I decided to incorporate some scrap yarn (as the pattern suggests).

The lower third of the hat contains only the Sunshine Lollipops yarn - variegated yarns make interesting slip stitch patterns without the need to join in new colours.