Can a sock be knitted in the round on straight needles?

Tomorrow [Saturday] I will be the tutor at an all-day sock workshop at the Blue Mountains group of The Knitters' Guild of NSW. Fortunately, because my Kitchener stitch is still a bit wobbly, I will have an assistant tutor who can apparently graft in her sleep! In my opinion, D. should actually be teaching the workshop as she has much more experience in sock knitting than I do. I love education in all its forms but she doesn't like being "up front" so I'll tutor and she'll help out with the tricky bits!

At the workshop we will knit a child-size sock in 8ply [DK] yarn from the [invisibly cast on] cuff down using a flap heel and a grafted toe. 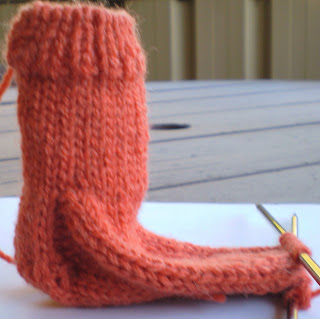 Not very exciting but at least we can get the sock knitted and hopefully grafted in the time allotted. My sample sock was knitted in two hours so I'm hoping that we'll be able to get through it in four hours [allowing for morning tea, lunch and the Guild meeting].

To this end, I decided to prove to myself [and the doubters] that it is possible to knit a sock on straight needles in the round. It took me five hours to knit a baby sock but I did it! The actual sock would have taken less than two hours but the heel was a real challenge and I had to try it at least five times!! No flap heel though; I tried and tried but couldn't make that work. In the end I went with an hourglass heel; at least that will give workshop participants an alternative!

Why would anyone want to knit a sock on straight needles? I really don't know; it's time consuming because every stitch has to be handled twice for every round! But I rose to the challenge. It can be done - here is the proof: 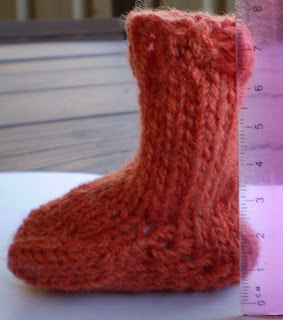