"in the round" sweater in the frogpond

I have been unable to find a pattern for a bottom up sweater knitted in one piece so have boldly gone where I've been before [not always successfully] - designing on the needles! The good thing about knitting for charity is I don't have to worry about the finished size and can therefore concentrate on other aspects of designing.

Therefore, without giving any thought to where and how it would finish, I boldly cast on 120 stitches of a [possibly] 5 ply yarn on 3.5mm needles and proceeded to knit ten rows of K1P1 rib and a stocking stitch body.

What to do with the sleeves? I could follow EZ and knit a yoked sweater but they are so passé. I wanted a dropped shoulder as that's the current style of knitwear. I figured I could knit in the round to the armholes then knit back and forth. Could I join the sleeves to the body [like entrelac] as I did this? Only one way to find out, so I proceeded to knit two sleeves.

With no children around, I had to look at a few patterns of 'knitted flat' sweaters to get some proportions. I looked at how many stitches were cast on for the body [times two] then how many stitches were cast on for the sleeve. I found this to be consistently 25% [EZ says 20% but I thought that was too small] and the finished number of stitches at the top of the sleeves would be 40%. I measured the width of my knitting [30cm] and found a pattern with a similar measurement. How long did they recommend for sleeves? 23cm - okay. I knitted the sleeves by casting on 25% [30 stitches], doing ten rows of ribbing, increasing two stitches in next row [first row of stocking stitch], and increasing every fourth row from then until I had 40% [48 stitches]. I then knitted straight until I had 23cm length but I didn't cast off.

I measured the width of the sleeve at that point, calculated the size of ten rows for the shoulders and added them together to work out how long the body needed to be to the armholes [I miscalculated - the finished body's too long but that's way better than too short!!] Then I proceeded to knit the back to and fro picking up one stitch from each sleeve as I went. 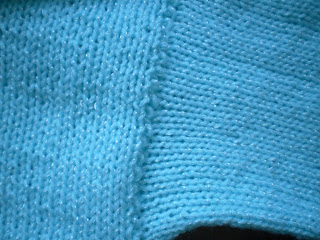 At this point, I have to say I would not use this technique again. A stocking stitch square is approximately three rows to two stitches so knitting up one stitch for every row stretches the sleeve width-wise which was okay on this very small child's sweater but would look very bad on an adult garment. So I would follow the advice [by email] of my blogging pal, Knitting Linguist, and pick up the stitches at the arm hole and knit the sleeve downwards. Better still, I might knit the whole garment top down but that's another project!

Then what about the shoulders? I’ve never tried short row shaping for shoulders but it's not a difficult technique so that's what I did. And how should I finish those shoulders? I was trying to complete the sweater with as little sewing as possible so I thought "three needle bind off". Now, I've never even seen this technique but the good thing about the Knitternet and being a member of the Guild is that I've heard of it - and that's all we need, right? So I looked in my trusty Vogue Knitting book. No such technique. But right at the end of bind-off techniques I found "binding off two pieces together" which is, of course, the three needle bind off. Neat finish - I like it a lot! 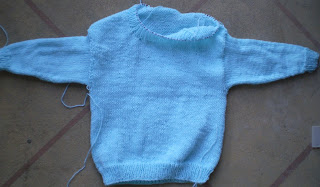 This photo shows the almost finished sweater which is obviously out of proportion! The sleeves look too short [in my opinion, I have no child to measure] for the size of the sweater. They are also obviously too narrow at the top for the armhole [as previously discussed]. If you look really closely, you'll also see a very definite line across the chest at the beginning of the armhole where my tension/gauge is obviously different knitting flat and knitting in the round! Something I didn't think to check.

Finally, this sweater is for a child and there’s no way a child's head was going to fit through the hole left for the neck - even before I knitted the neckband. Fortunately, I had only bound off one shoulder so I knitted the neckband back and forth and then knitted a little placket for some buttons and voila - awful! The sweater is in the frogpond until I decide how to redeem it. Right now I think it will be a complete rip back!

However, as the old saying goes: "nothing ventured, nothing gained" and I have learnt quite a bit from this exercise project! Just as well, because it was a try out for a much larger project - an adult's jumper! Which I won't be knitting in this manner!!
Posted by Lynne at 3:48 pm