I've just been on Lara's blog where she is bragging on her husband a little! [Hi Mark]. She inspired me to stand up and be counted!!

On DD's wedding day, she said she would like a photo taken in her room with the mural that was painted there when she was ten. When she left for her appointment at the hairdressers, her bed was unmade and the room was untidy - as it had been for several years to a greater or lesser extent. When I left to join her [an hour later] WM made the bed and tidied the room by putting everything inside the double wardrobe behind said mural which is shown here because what mother can resist showing a photo of her only child on her wedding day? And because I know you want to see the mural! 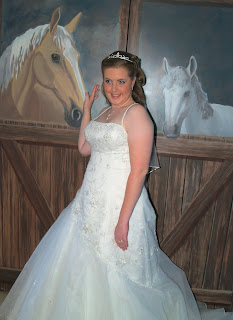 I have really enjoyed walking up the hall for the week we've been home from Bundeena and seeing that tidy room. On Sunday, DD & SIL opened their wedding presents and left her [former] room looking like a bomb had gone through it - presents, cards and wrapping from one end to the other. The untidiness was rather unnerving after two weeks of tidy so yesterday, while I was at work and he was enjoying his last week of leave, WM tidied the room again: presents neatly stacked, cards on top and paper smoothed out and flat on the bed! When I commented, he said: "I did it for you, not for them!" Isn't that sweet?

And if that isn't enough - [he's on leave from work remember] today he washed all the towels, vacuumed the carpets, swept and washed all 44 square metres of hard flooring and swept the back veranda [18 square metres]. Isn't he truly a Wonderful Man?
Posted by Lynne at 3:23 pm